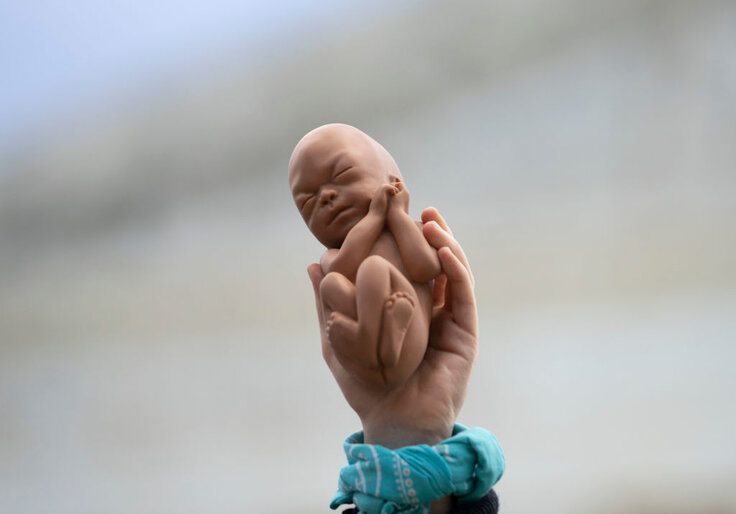 Forty-nine years ago, the Supreme Court invented out of whole cloth a near-absolute right to abortion. It affirmed that right 19 years later. Last week, it amended those most grievous mistakes.

“The Constitution does not confer a right to abortion; Roe and Casey are overruled; and the authority to regulate abortion is returned to the people and their elected representatives,” reads the syllabus appended to the Court’s Friday decision. Many have awaited those words to be inked for decades. At last, there they are.

The last clause of that statement is the most exigent; it affirmatively gives and demands something. Each of us may now self-govern on an issue that we’ve been forbidden from for nearly half a century. To put it even sharper still, it’s incumbent on each of us that we do.

Where, then, should those looking to partake turn? How should they think of abortion—its past and its present? A good starting point is Ryan T. Anderson and Alexandra DeSanctis’s new book, Tearing Us Apart.

The authors’ goal is twofold: The book, they say, is intended to “show those who haven’t made up their minds on this issue how abortion has hurt our country” and to “equip pro-life readers with the truth so they can offer it courageously to others.” It’s a project of persuasion—an especially honorable one, considering its subject. It’s ambitious, too. Consider its thesis: Abortion harms everything and solves nothing.

Proving so encompassing a claim appears, at first pass, to be an especially tall order. Anderson and DeSanctis (a former colleague of mine when I worked at National Review) rise to it by starting at the most foundational level. They find and articulate an anthropological framework for understanding human relationships. In other words, they describe what it means to be human and then survey the consequences of living with an impoverished sense of who we are and what we’re made for. As we’ll see in a moment, that survey—the list of harm done—is expansive.

The central truth that animates their framework of what it means to be human is that we belong to each other. We are embodied human persons, and so dependence is baked into our DNA. As Notre Dame law professor O. Carter Snead describes in his own book on the subject, “Because we are bodies, vulnerability, mutual dependence, and natural limits are inextricable features of our lived human reality.” That fact situates us in relationship to one another and gives life to an ethic of mutual obligation. We have duties to care for the least among us—particularly the unborn, the elderly, and the disabled—and others have duties to care for us. Properly understood, we depend on what Alasdair MacIntyre refers to as networks of “uncalculated giving and graceful receiving.”

Yet as Anderson and DeSanctis note, this could hardly stand in further contrast to the vision of the human person that informs abortion. That conception is atomizing—it thinks of the human as being defined by her ability to “formulate and pursue future plans of [her] own invention.”

To be human, then, isn’t to accept obligations other than those we wish to take on.

When applied to pregnancy, the thinking justifies abortion by casting mother and child as competing wills. As Anderson and DeSanctis write, “abortion strikes at the bond between mother and child, turning [the pregnancy] into a conflict between adversaries and a justification for violence, a relationship not of love but of antagonism and mutual destruction.” Never mind that the zygote formed at the beginning of pregnancy is intimately joined with her mother, their lives integrated with one another. Autonomy-based conceptions of personhood allow that radical dependence to be subordinated to a stronger, individual will, even after biological bonds have been formed. We can, incidentally, see this understanding in Justice Stephen Breyer’s dissent in Dobbs v. Jackson Women’s Health: “Respecting a woman as an autonomous being, and granting her full equality, meant giving her substantial choice over this most personal and most consequential of all life decisions.”

What Anderson and DeSanctis take care to mention, though, is that this dependence is not limited to childbirth—it exists at all stages of life. “The unborn child,” they write, “is no different than the newborn (or, for that matter, the adult) in its dependence on others, though the form of dependence in the womb is more radical.” Mothers and fathers, now that they’ve brought new life into the world, have thus already opted into parenthood before the birth of their child. They necessarily owe “duties in justice” to that new life. Anderson and DeSanctis wisely spend their first few pages establishing that what they’re talking about is exactly that: human life. That a distinct human organism comes into being at the moment of conception—something that we can turn to embryology, not merely Scripture, to affirm. That though the baby is immature, “she is not in any sense a ‘potential life.'” Her life has already begun, and she has potential, dependent on her mother and father’s care. And all human life is deserving of legal protection.

Crucially, Anderson and DeSanctis aren’t simply rejecting abortion. Their case isn’t limited to just a negative. Instead, they accompany that case with a robust concept of what it means to live with and for one another—and in so doing affirm the “beauty and goodness of every human life.” The book’s impassioned argument against ending human life is complemented, in equal measure, with a positive case for cherishing the dignity of the human person.

After laying this foundation, Anderson and DeSanctis turn to cataloguing what the past half century has wrought. Their seven chapters consider different victims of abortion’s false anthropology: the unborn baby and her mother, especially, but also social equality, our medical system, the rule of law, our politics, and our media and popular culture.

In each, the authors unearth statistics and stories that challenge—if not outright refute—prevailing orthodoxy. Take the claim that women need abortion in order to participate in the economy on equal footing with men. Anderson and DeSanctis explain how the abortion rate between 1980 and 2017 dropped by more than 50 percent, but that “during that same time frame, women have made major advancements judging from key economic, professional, and academic metrics.” “Since 1980 … women’s per capita earnings have increased, and the income gap between men and women has decreased,” they add.

Or consider the claim that chemical abortions—which now consist of more than half of all administered nationwide—are safe. Anderson and DeSanctis report on how, after Britain began to offer them via telemedicine (as is done in this country), “emergency calls related to chemical-abortion complications increased by 54 percent across England and Wales, and ambulance responses for such calls rose by 19 percent.” They also supply stats for complications in the United States, including tallies on deaths, adverse events, hospitalization, blood loss requiring transfusions, and infection.

Each recounting leaves the reader with the sense that abortion distorts—and corrupts—everything it touches.

Given the book’s timing, it cannot be directly responsive to everything that’s transpired since it was sent to press. While they speak to the decades-long effort at marginalizing pregnancy-resource centers, Anderson and DeSanctis can’t speak to vandalism that followed the leak of Justice Samuel Alito’s draft opinion. Readers less familiar with the topic will have to seek out other sources on those events, including on recent policy proposals—such as Sens. Romney, Burr, and Daines’s iteration of the Family Security Act—that Anderson and DeSanctis motion toward but can’t incorporate.

Nevertheless, Tearing Us Apart should be considered a playbook—if not for how to craft exact policies after Roe, then for how to think about abortion and how to correct the talking points that are offered in service of it. Indeed, the book dispenses with established and widely accepted narratives and reveals to the reader the infrastructure and work of the pro-life movement. In so doing, it brings to life a world that is typically only caricatured or maligned. But most important, it gives us a proper sense of who we are—and the duties we owe.

Tearing Us Apart: How Abortion Harms Everything and Solves Nothing
by Ryan T. Anderson and Alexandra DeSanctis
Regnery, 256 pp., $29.99