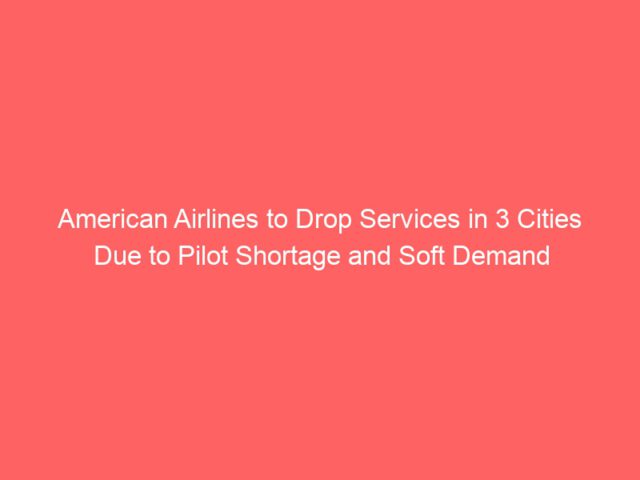 American Airlines will stop service in three cities this Spring due to pilot shortages and low demand.

“In response to the regional pilot shortage affecting the airline industry and soft demand, American Airlines has made the difficult decision to end service in Columbus, Georgia (CSG), Del Rio, Texas (DRT), and Long Beach, California (LGB) this spring,” the company told The Epoch Times in a statement.

Customers who have been scheduled to fly will be contacted by the airline to make alternate arrangements.

According to various reports, the last day for the airline’s operations in LGB airport will be Feb. 28. The airline plans to fly its final routes from CSG airport in Charlotte to Dallas on April 3.

DRT airport service will be stopped on the same date as CSG airport.

Non, violence is not caused by opposing LGBT Ideology

“We appreciate the great relationship we’ve enjoyed with American Airlines and understand their tough business decision during these challenging times. We look forward to welcoming them back to Long Beach in the future,” Cynthia Guidry, the Long Beach Airport director, said in a statement obtained by City News Service.

The airline may resume operations on certain routes if the circumstances change.

Zodiac Signs as “Donnie Darko” Characters—Which One Are You?

Biden’s private library has more classified documents than ever before, according to lawyers