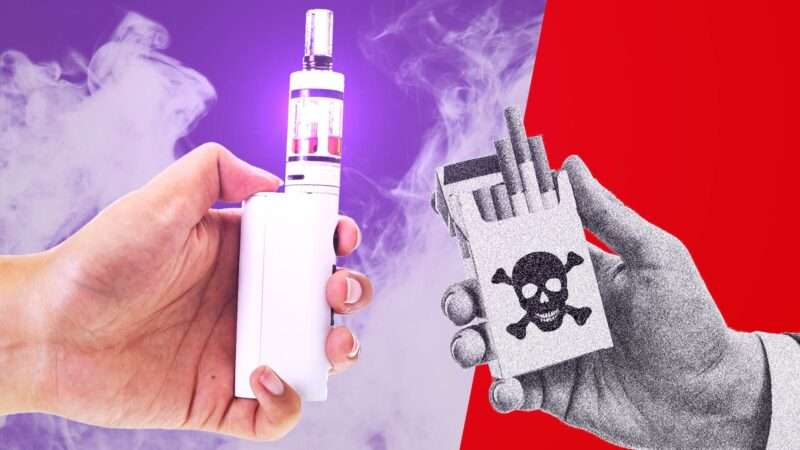 The war on drugs is winding down, and the war on tobacco is ramping up. E-cigarettes, a safer nicotine-delivery alternative, have contributed to plummeting use of traditional cigarette smoking. Yet the Food and Drug Administration (FDA) has effectively made it harder for cigarette smokers to switch by limiting vapes from the market. The agency also recently announced a ban on menthol cigarettes and flavored cigars, which will push more products onto the black market, with all sorts of unintended consequences.

“As tobacco, e-cigarettes, and e-liquids transition from legal to illicit, law enforcement agencies will more aggressively interfere with production, distribution, retail sales, and in some cases even individual use,” wrote Jacob Grier, author of The Rediscovery of Tobacco: Smoking, Vaping, and the Creative Destruction of the Cigarette, in a recent issue of Reason. And there’s no way to know how far police will go when black market purveyors inadvertently break the law by selling banned smoking products.

There’s overwhelming evidence that vaping is safer than smoking regular cigarettes, and that policymakers should be making it easier for Americans to switch. “Vaping isn’t completely risk-free but is far less harmful than smoking tobacco,” according to the British Royal College of Physicians.

“Laboratory tests of e-cigarette ingredients, in vitro toxicological tests, and short-term human studies suggest that e-cigarettes are likely to be far less harmful than combustible tobacco cigarettes,” according to the National Academies of Sciences, Engineering, and Medicine.

“We are in this kind of collective hysterical mindset that really resembles what happened with the war on drugs, back in the late eighties and nineties,” says Ethan Nadelmann, the founder and former director of the Drug Policy Alliance and a central figure in the unwinding of America’s longest war.

By banning options that smokers overwhelmingly prefer, and leaving the traditional cigarette untouched, the FDA is repeating the mistakes of the drug war, says Nadelmann.

“Every society needs a boogeyman.”

Written and narrated by Natalie Dowzicky; edited by Danielle Thompson.

The post Anti-Vaping Hysteria Is Deadly appeared first on Reason.com.