A new Border Patrol enforcement policy has been disseminated to agents warning them not to enforce immigration laws or attempt to arrest migrants near waterways, walls, canals, or other barriers. According to a CBP source, the policy most likely foreshadows pending administrative disciplinary charges against members of the agency’s Horse Patrol Unit lodged during the Haitian migrant crisis in Del Rio.

The source, speaking on the condition of anonymity, says the document also warns against repatriating migrants without due process by encouraging them to return to Mexico. The memorandum from Tony L. Barker, Acting Chief of the Border Patrol’s Law Enforcement Directorate, was disseminated on Friday.

Specifically, the document advises agents to follow the instructions given when apprehending migrants at or near the immediate border area:

When encountering individuals in dangerous environments, Border Patrol Agents (BPAs) should take extra law enforcement safety precautions. Whatever the situation encountered, such as a river, canal, or other waterway; the border fence, wall, or other barriers keep the following general guidance in mind:

A presentation designed to educate Border Patrol agents on the new enforcement policy accompanied the memorandum. The source says the document will likely encourage agents to refrain from any enforcement activities near the immediate border.

The source says the sudden dissemination of the new instructions is likely a foreshadowing of administrative disciplinary charges for the mounted agents involved in the Haitian migrant crisis in Del Rio last fall. In all likelihood, the Horse Patrol agents in question will be accused of endangering the migrants close to the river, alleging that they were attempting to force them back without due process, the source explained to Breitbart Texas. 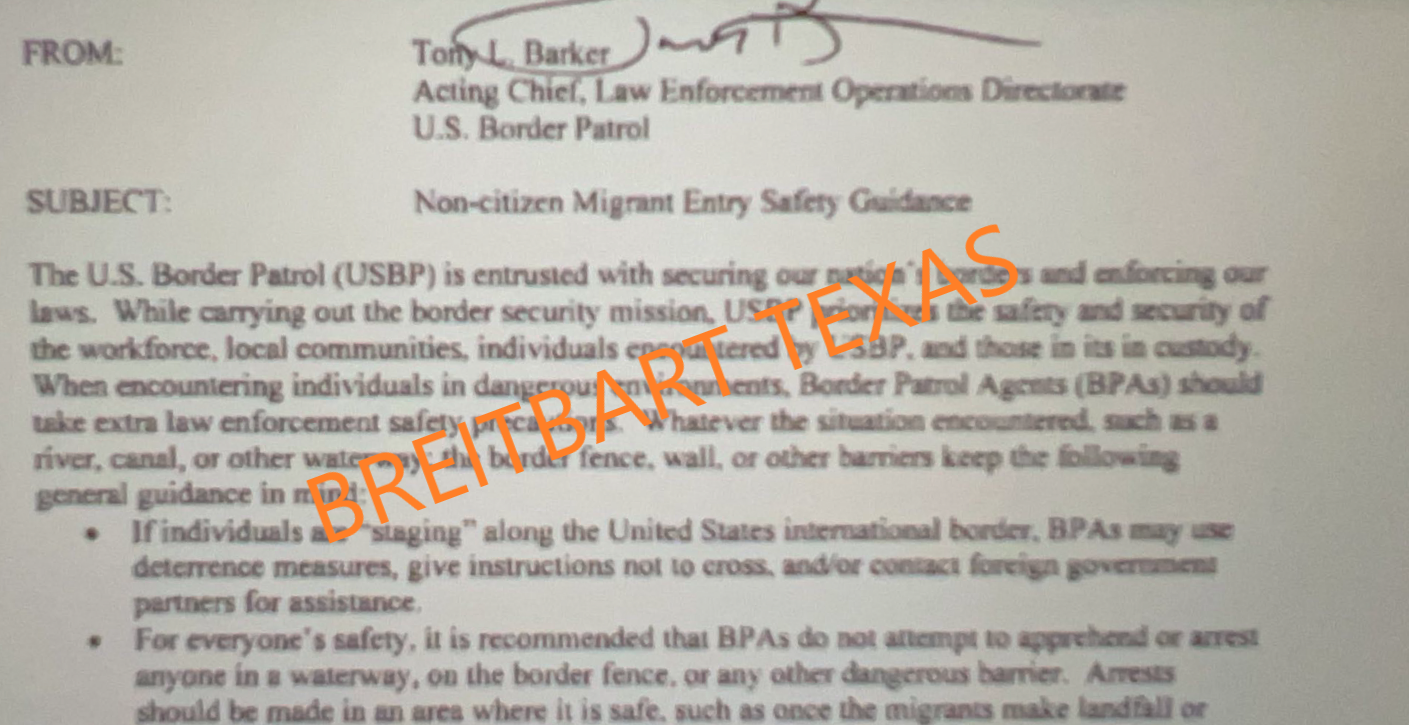 Four Horse Patrol Unit Border Patrol agents have been assigned to administrative duties since the allegations were lodged against them by DHS Secretary Mayorkas. The allegations stem from a highly publicized incident on September 19, 2021, near a makeshift outdoor encampment holding roughly 15,000 mostly Haitian migrants. Video and photographs taken by freelance journalist Paul Ratje were widely circulated and sparked initial claims that agents were “whipping” migrants.

Further examination led many to concede the images showed Border Patrol agents using long reins to control the horses. The photographer who captured the incident also denied witnessing the agents making any whipping actions at the migrants.

In December 2021, the agents were cleared of criminal wrongdoing.

Randy Clark is a 32-year veteran of the United States Border Patrol.  Prior to his retirement, he served as the Division Chief for Law Enforcement Operations, directing operations for nine Border Patrol Stations within the Del Rio, Texas, Sector. Follow him on Twitter @RandyClarkBBTX.

Editor’s note: The original headline was updated to reflect that arrests are instructed to occur off of border barriers or once a migrant crosses the Rio Grande and onto U.S. soil.

The Drag Stripper In Full Panicked Retreat After Dancing for Children Tells Us a...

Leftists, Media Melt Down Over Dobbs Allowing Babies To Live