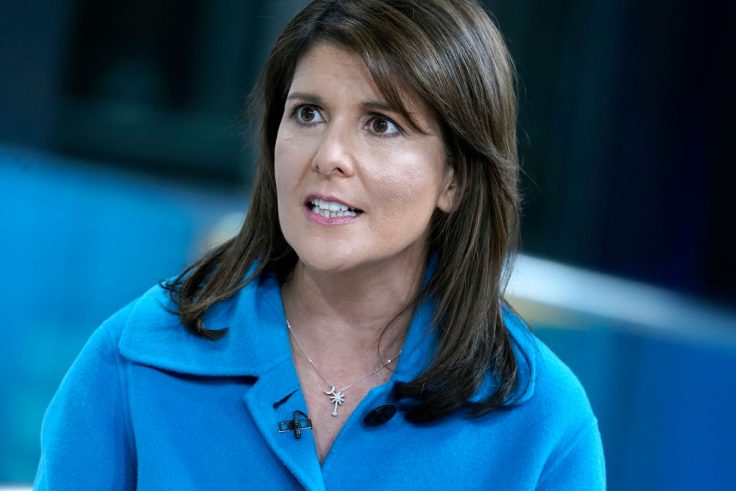 The Biden administration is poised to give Iran “more than a hundred billion dollars” in cash windfalls if it signs a new nuclear deal, according to former ambassador to the United Nations Nikki Haley, who also hinted to a group of pro-Israel activists on Monday that she will run for president in 2024.

With negotiations over a revamped nuclear deal ongoing, Haley warned an audience of pro-Israel activists that the Biden administration is preparing to unload billions of dollars to Tehran—money that “will fund terrorist attacks on Israel and America.”

Biden has “made clear that he’ll do almost anything to get the ayatollahs to sign on the dotted line,” Haley said in a speech before the Christians United for Israel organization during its annual gathering in Washington, D.C. “And do you know who Biden allowed our lead negotiator on the Iran deal to be? Russia.” An advanced transcript of her remarks was obtained by the Washington Free Beacon.

Haley said that with Moscow’s help, the Biden administration is laying the groundwork for Iran to obtain “missiles and nukes to destroy both Israel and America.”

Haley’s speech, which focused heavily on Israel and the threats posed by both Iran and Russia, comes amid speculation that she will throw her hat into the ring for the 2024 Republican presidential nomination—rumors that she appeared to confirm in her speech. It also laid the groundwork for a foreign policy approach that would refocus America on countering Iran and its growing alliance with Russia.

“Anything Joe Biden signs [with Iran] will all but guarantee that Iran gets the bomb. No deal is better than a bad deal,” she said. “And if this president signs any sort of deal, I’ll make you a promise. … The next president will shred it—on her first day in office.”

In addition to advocating for increased U.S. military aid to Israel to help it confront Iran, Haley discussed the war in Ukraine and blamed the Biden administration’s failures in Afghanistan for fueling Russian president Vladimir Putin’s invasion.

“If America hadn’t failed so miserably in Afghanistan, there never would have been a war in Ukraine,” she said. “Putin saw the strongest country in history leave Bagram Air Force Base in the middle of the night—without even telling our allies who stood shoulder to shoulder with us for decades.”

The 20 best hair removal products of 2022 that actually work

The bungled U.S. withdrawal from Afghanistan is why “Putin made his move. It’s the price we pay for American weakness. And now countless Ukrainians are paying for our mistake with their lives,” Haley said.

Other world dictators learned a similar lesson when the United States ran out of Afghanistan, according to Haley.

“Putin wasn’t the only one who saw a green light in Afghanistan. So did Kim Jong Un in North Korea. So did Xi Jinping in Communist China,”
she said. “And last but not least, our surrender in Afghanistan was the gift that keeps on giving for Iran. When Kabul fell, the ayatollahs celebrated.”

Haley also criticized Biden’s recent trip to the Middle East, including Israel, where he announced a $300 million cash infusion to the Palestinian government. The Free Beacon exclusively reported last week that a large portion of this cash is funding the United Nations Relief and Works Agency, known as UNRWA, which has a history of inciting violence against Jews.

“The money has no conditions, no strings, nothing. The Palestinians can keep stoking hatred of Israel,” Haley said of the renewed funding. “They can keep paying the families of terrorists, which encourages more suicide bombings. Basically, the Palestinians can use America’s money to attack America’s ally. It’s a disgrace.”

Why is Brazil’s Amazon rainforest burning?

Ferrer Gave Patronage Job to a Felon Convicted on Charges Related to Corruption and...

Leftists, Media Melt Down Over Dobbs Allowing Babies To Live

Why is Brazil’s Amazon rainforest burning?