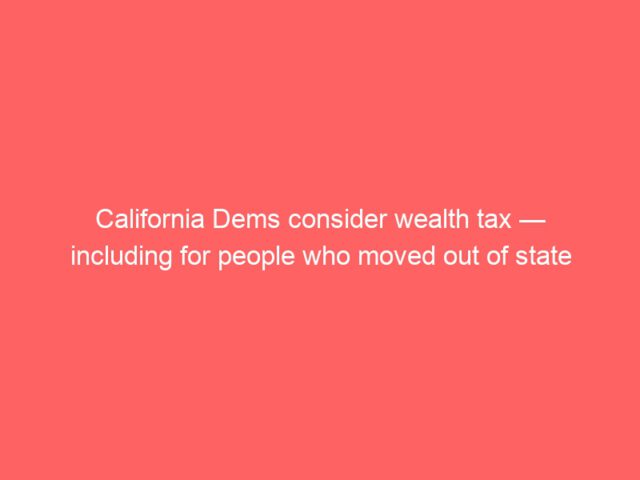 California lawmakers are pushing legislation that would impose a new tax on the state’s wealthiest residents — even if they’ve already moved to another part of the country.

Assemblyman Alex Lee, a progressive Democrat, last week introduced a bill in the California State Legislature that would impose an extra annual 1.5% tax on those with a “worldwide net worth” above $1 billion, starting as early as January 2024.

Taxes would begin to drop as soon as 2026. Those with a global net worth of more than $50 million will be assessed a 1% annual wealth tax. Billionaires would still be subject to 1.5% tax.

The wealth of the world extends beyond an individual’s annual income and includes diverse holdings like farm assets, art, stocks, and interest in hedge funds.

One Of Most Sacred Sites For Jews & Christians To Be Fully Opened To Public: ‘Miracle’ Pool Of Siloam

This legislation is a modified version a wealth tax that was approved by the California Assembly in 2020. However, the Democrat-led state Senate rejected it.

The current version just introduced includes measures to allow California to impose wealth taxes on residents even years after they left the state and moved elsewhere.

Exit taxes aren’t new in California. But this bill also includes provisions to create contractual claims tied to the assets of a wealthy taxpayer who doesn’t have the cash to pay their annual wealth tax bill…

David Beckham addresses the controversy over an 8-figure deal to promote Qatar as World...

Sydney will Shine with the Biggest NYE Fireworks