Japan’s foreign ministry confirmed Thursday that a flotilla of Chinese Navy ships that entered waters near Japan’s Tsushima Strait on June 12 completed a circumnavigation of the archipelago after a nearly three-week mission that saw the ships end their journey near Taiwan, Kyodo News reported.

The Tokyo-based news agency detailed the development on June 30, writing:

Two [Chinese] guided-missile destroyers and a supply ship sailed through waters between Okinawa’s main island and Miyako Island in southwest Japan and entered the East China Sea Thursday [June 30] after circling around the country for about 20 days, and the ministry is analyzing China’s intentions, according to the ministry’s Joint Staff.

Japan’s Self-Defense Forces vessels and aircraft had kept a vigilant watch for the Chinese navy’s flotilla, which was spotted sailing in the Sea of Japan after passing through the Tsushima Strait off Japan’s southern island of Kyushu from June 12 to 13 and going around the archipelago clockwise, according to the Joint Staff.

The Chinese flotilla on Thursday sailed through Japan’s Miyako Strait, which is a narrow maritime passage between Okinawa and Miyako. The island of Miyako lies 277 miles east of Taiwan.

Beijing claims Taiwan as its rightful territory despite the island’s status as a sovereign nation. China’s ruling Communist Party has repeatedly vowed to “reunify” Taiwan with “the mainland,” i.e. China, and regularly conducts military drills near the island as a form of intimidation. Beijing additionally claims Japan’s Senkaku Islands, which are located 219 miles northeast of Taiwan. Chinese vessels often sail through waters near the uninhabited but strategically located islets. 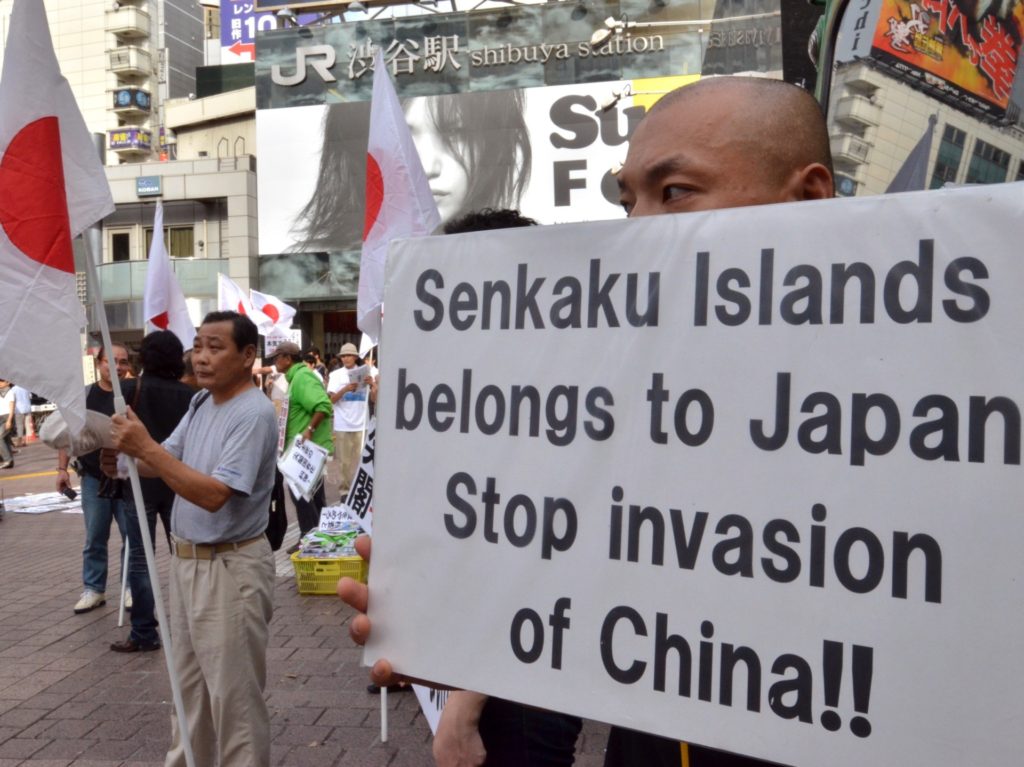 Japanese nationalists carry national flags and placards during a rally over the Senkaku islands issue, known as the Diaoyu islands in China, in Tokyo on September 18, 2012. (Photo credit should read YOSHIKAZU TSUNO/AFP/GettyImages)

China’s state-run Global Times suggested on June 21 that the Chinese navy flotilla first spotted in Japan’s Tsushima Strait on June 12 would likely circumnavigate the Japanese archipelago in the coming days.

Led by the Type 055 large destroyer Lhasa, a Chinese People’s Liberation Army (PLA) Navy flotilla reportedly sailed from northwest to the east and south sides of Japan on Monday [June 20] and Tuesday [June 21] after making transits in three strategic straits near the island country, and the vessels are expected to make a full circle around Japan if they are to continue in their path and return to base.

The Chinese naval mission to circle Japan lasted 18 days from June 12 to June 30. Beijing has yet to officially comment on its intention with the exercise, though the Global Times on June 21 suggested the act was meant to counter Japan’s recent public support for Taiwanese sovereignty.

The newspaper cited the opinion of an unnamed “Chinese military expert” who said he believed the latest Chinese naval activities near Japan served as a “warning” to Japan and the U.S., which is another unofficial ally of Taipei that has repeatedly condemned Chinese military aggression against the island.

“[W]hen Japan and the US have been making repeated provocations on China over the Taiwan question, the PLA’s naval activities serve as a warning to them, as some of the most important Japanese and US military bases are located on the east side of Japan, like the US Navy base in Yokosuka,” the Chinese military analyst said.

“The US and Japan should realize and get used to the fact that the PLA is fully capable of safeguarding China’s sovereignty, territorial integrity and developmental interests, and they should stop hyping the so-called ‘China threat’ theory, attempting to contain China militarily and interfering in the Taiwan question, which is an internal affair of China,” he added.