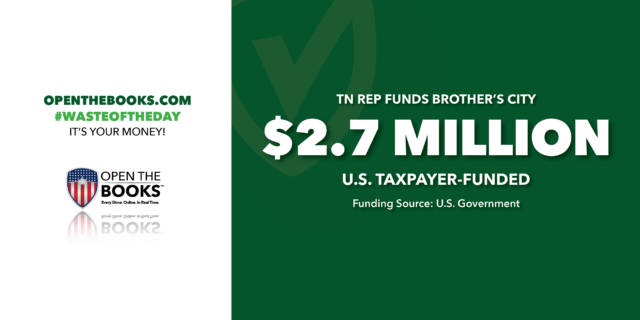 By Adam Andrzejewski for RealClearPolicy

Earmarks are back, with Congress’ recent spending bill containing over $16 billion in earmarks. This includes earmarks made by Congressman Jim Cooper (D. Tenn.), and that were sent directly to Metropolitan Government of Nashville & Davidson County, where his brother John Cooper is mayor.

Earmarks allow federal legislators to allocate money for local projects within their states and districts through special funding mechanisms called earmarks. Dubbed “the currency of corruption,” earmarks were once banned but legislators voted to bring them back in 2021.

Auditors at OpenTheBooks.com analyzed the federal earmarks database, and found that Congressman Cooper authorized two earmarks, one worth $2.2 million for unspecified “facilities and equipment,” and another worth $539,000 for an “urban forestry project.” Both go directly to his brother John Cooper’s unit of government, Metro Nashville.

Congressman Cooper, who is retiring at the end of this term, earmarked a total of $17.9 million over 10 earmarks for his district, including $4 million to the Fisk University John R. Lewis Center for Social Justice — Race Relations Building, and $2.5 million to the Moves & Grooves…

DeSantis Derangement syndrome is getting stronger by the day