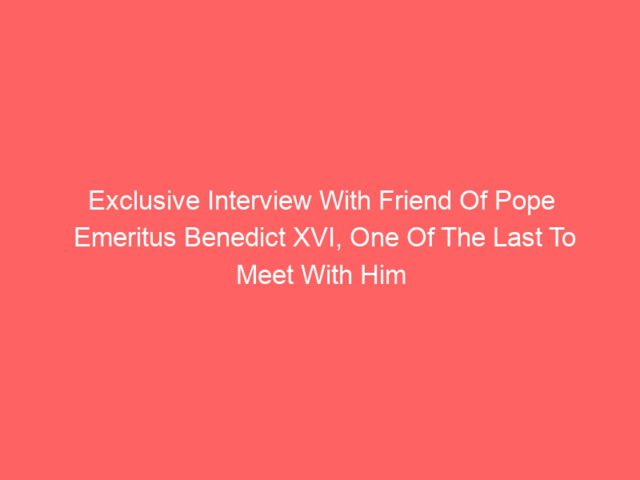 Just before his death in December, German archeologist, historian, and prolific writer Michael Hesemann met the Pope Emeritus to make what would be his last annual trip with his friend.

In an exclusive interview with The Daily Wire, Hesemann recounted — through email — intimate moments of friendship and brotherhood he shared with the Ratzinger brothers, and how the loss of both men in a span of a few years has impacted his life.

Democrats Call for Republican George Santos to Resign, and They Can Go Pound Sand – RedState

DW: Michael. How (and when) did your acquaintance with the Ratzinger brothers come about?

Hesemann: My uncle, who was one of the leading ophthalmologists in our country, Prof. Siegfried Niedermeier, knew and treated Cardinal Ratzinger since the mid-1990’s. My aunt has dozens of letters written by him during their time in Tyrolia.

In 1998, I met Cardinal Ratzinger for the first time and presented him with my book “The Title of The Cross”, on the venerated relic in Rome’s Basilica di Santa Croce, which he seemed to like….

Trends in Jackets 2023: Crazy Textures and Colorful Leather Are Reigning

Joe Biden and McConnell to Promote Infrastructure in Kentucky

This iconic jewelry brand is offering 10% off personalized pieces