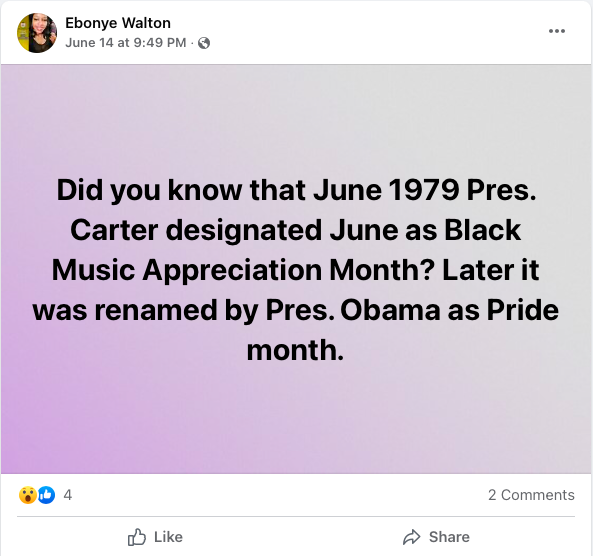 Pride month was first recognized in 1999 by former President Bill Clinton. African American Music Appreciation Month is still being celebrated today and has not been removed.

The Facebook post reads, “Did you know that June 1979 Pres. Carter designated June as Black Music Appreciation Month? Later it was renamed by Pres. Obama as Pride month.” The post provides no information as to what year during his presidency the month was renamed.

The claim regarding Pride month is incorrect. Clinton first established Pride Month in 1999 through Proclamation 7203, which is available through the American Presidency Project from the University of California in Santa Barbara. (RELATED: Viral Image Claims Barack Obama Never Mentioned Juneteenth During His Presidency)

Both June celebrations continue to be recognized by the White House. President Joe Biden issued a proclamation May 31 recognizing June 2022 as “Black Music Appreciation Month” and also did so in 2021.

Check Your Fact has reached out to the White House for comment and will update this piece if a response is provided.

‘Worst Attack On This Republic In Modern History’ (VIDEO)