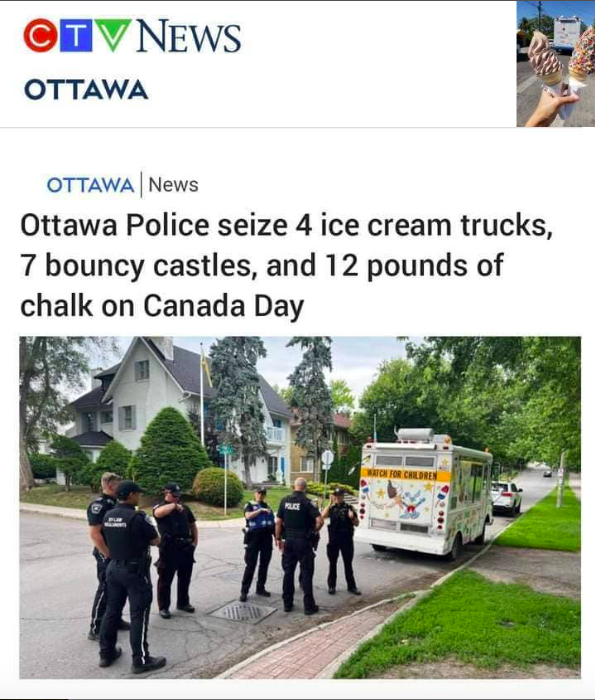 The article is digitally fabricated. There is no evidence CTV published such an article.

Canada Day occurs July 1, the day the country’s constitution was legally established in 1867, according to Canada’s government website. The country recently celebrated its 150th anniversary in 2017, the site states.

An image shared on Facebook claims this recent Canada Day was marked by a heavy police presence. The image shows what appears to be a screenshot of a CTV News article with a headline that reads, “Ottawa Police seize 4 ice cream trucks, 7 bouncy castles, and 12 pounds of chalk on Canada Day.”

“Thanks to that fucken asshole Justin Trudeau this is your tax dollars at work in Ottawa,” reads part of the image’s caption. (RELATED: Will The Memphis Police Department No Longer Respond To Certain Crimes?)

The image is digitally fabricated. No such article appears on the CTV News website or on the outlet’s verified social media accounts. There are likewise no credible news reports indicating that such seizures occurred in any part of Canada.

This is not the first time a fabricated CTV News article has circulated on social media. Check Your Fact previously debunked claims suggesting the outlet reported on “unvaccinated sections” on planes and published a column that alleged, “conspiracy theorists keep getting things right.”

Not Quite Her Majesty’s Service

Review: The co-operative model in Trentino (Italy) – A case study