A rare glimpse! Gigi Hadid posted her baby and Zayn Malik on her Instagram story. The model wished her father and the ex-One Direction singer a happy Father’s Day on June 19, 2022.

Gigi posted a heartfelt post for her father, Mohamed Hadid on Instagram with the caption, “Happy Father’s Day to my sweet baba. I love you.” Immediately after that photo, she posted a photo of Zayn and their child, Khai, “And to Khai’s baba!” she captioned. The photo featured a faceless Zayn playing with their daughter.

Gigi and Zayn dated on and off from November 2015 to October 2021. The couple had their baby Khai in September 2020.  A source told People on October 28, 2021, that Zayn and Gigi broke up as a result of his physical fight with Gigi’s mom, Yolanda. “They are not together right now. They are both good parents though,” a Hadid family friend said. “They co-parent. Yolanda is of course very protective of Gigi. She wants the best for her daughter and grandchild.” 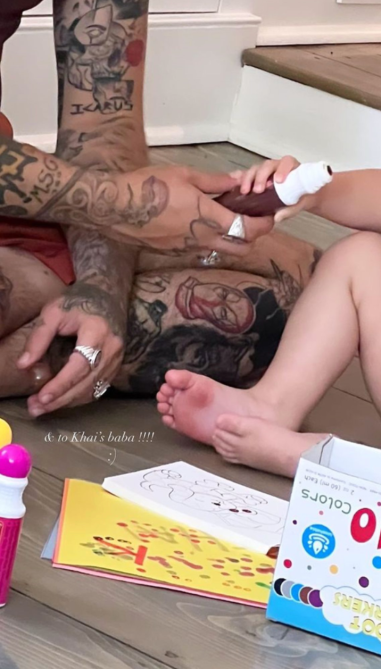 Hours before the news of their split, Zayn took to his Twitter to explain his side of the story with Yolanda. “As you all know I am a private person and I very much want to create a safe and private space for my daughter to grow up in,” he wrote. “A place where private family matters aren’t thrown on the world stage for all to poke and pick apart. In an effort to protect that space for her I agreed to not contest claims arising from an argument I had with a family member of a partner’s who entered our home while my partner was away several weeks ago.” He also said in a statement to TMZ, “I adamantly deny striking Yolanda Hadid and for the sake of my daughter I decline to give any further details and I hope that Yolanda will reconsider her false allegations and move towards healing these family issues in private.”

According to court documents obtained by TMZ, Zayn was charged with four criminal offenses of harassment after he allegedly “shoved” Yolanda and caused her “physical pain.” Though the documents state that he pled guilty to one count, court officials told TMZ that Zayn pled no contest. Zayn was required to serve 90 days of probation for each of the four counts; he must also complete an anger management class and a domestic violence program and is currently barred from having contact with Yolanda.

For more about the Hadids, read Yolanda Hadid’s 2017 book, Believe Me: My Battle with the Invisible Disability of Lyme Disease
. In the memoir, Yolanda opens up “in a way she’s never been able to in the media before” about her famous children—Gigi, Bella and Anwar—and how her “perfect marriage” to their father, Mohamed Hadid, ended in divorce. The book also follows Yolanda’s battle with late-stage Lyme disease, a bacterial infection that attacks one’s nervous system, after years of struggling to get a diagnosis. Yolanda, who also includes her time on The Real Housewives of Beverly Hills in the book, calls the memoir an “inspiring lesson in the importance of having courage and hope.”

Our mission at STYLECASTER is to bring style to the people, and we only feature products we think you’ll love as much as we do. Please note that if you purchase something by clicking on a link within this story, we may receive a small commission of the sale.

Elon Musk Is Right. Having Kids Is Not An Economic Decision