Republicans are worried that the party may blow it in a key Washington state congressional district, as evidenced by a new poll obtained by Breitbart News.

The NMB Research poll, conducted from May 2 to May 5 in the GOP primary in Washington’s eighth congressional district, zones in on the electability in the general election of two key candidates in the primary. The survey size was 400 likely primary voters and has a margin of error of 4.9 percent.

While concluding that the “political environment is already tilting against the Democrats,” the pollster warns that if the wrong Republican wins the GOP primary here that the district could slip out of grasp for Republicans in November and see Rep. Kim Schrier (D-WA) re-elected and a pickup shot blown.

The primary is fast approaching on August 2. The Congressional Leadership Fund (CLF), a super PAC closely aligned with House GOP leader Kevin McCarthy, has lined up more than $2 million in ad buys in the fall here.

Jensen is a former Army Ranger who serves as the president of Task Force Argo—a group dedicated to evacuating American citizens who Democrat President Joe Biden left behind in Afghanistan when the Taliban took back over—and the clear favorite of many Republicans who would like to see him as the nominee in this district.

Dunn, on the other hand, has deep personal problems, as evidenced by an April report in the Daily Mail about how allegedly he got drunk on a lobbyist’s yacht trip and then apparently left his five-year-old daughter to fend for herself when her shoes fell overboard.

“Reagan Dunn has too many skeletons in his closet to defeat Schrier,” pollster Glen Bolger of NMB Research wrote in a memo releasing the poll findings to interested parties. “Jesse Jensen is the only candidate with a pathway to winning the general election against Schrier and turning Washington CD 8 red again.”

At this stage, national Republicans are neutral in the primary, but some are hoping that this polling data might swing action toward Jensen and away from Dunn to protect the party’s possibility of a November pickup.

The pollster details first and foremost that an environment exists in which Schrier could be defeated, especially given the red wave year that Republicans expect. “Only 21% of voters in the district say the country is going in the right direction, while 70% say things are pretty seriously off on the wrong track, a clear indicator that a change election is in the works,” Bolger wrote in the memo. “Joe Biden’s job rating is underwater at 47% approve/51% disapprove in a district he won by seven points. Intensity is strong against him, with 27% strongly approving and 43% strongly disapproving. Among Independents, Biden has a 29% approve/66% disapprove rating, a terrible sign for Democrats.” 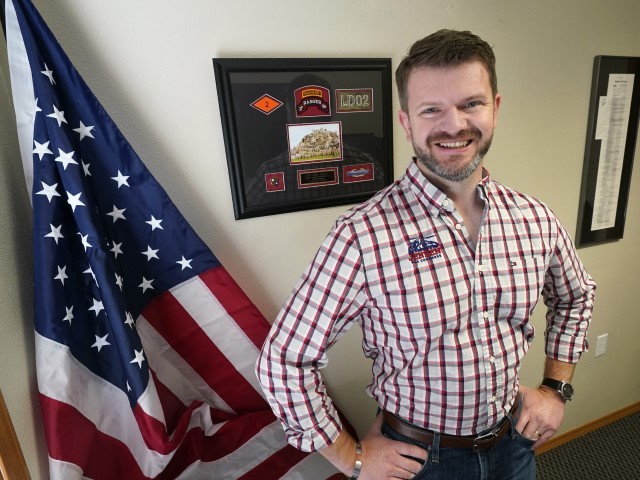 Jesse Jensen poses for a photo in his campaign office on Tuesday, September 29, 2020, in Pacific, Washington. Jensen is an Army veteran from Bonney Lake who did four combat tours in Afghanistan. (Elaine Thompson/AP) 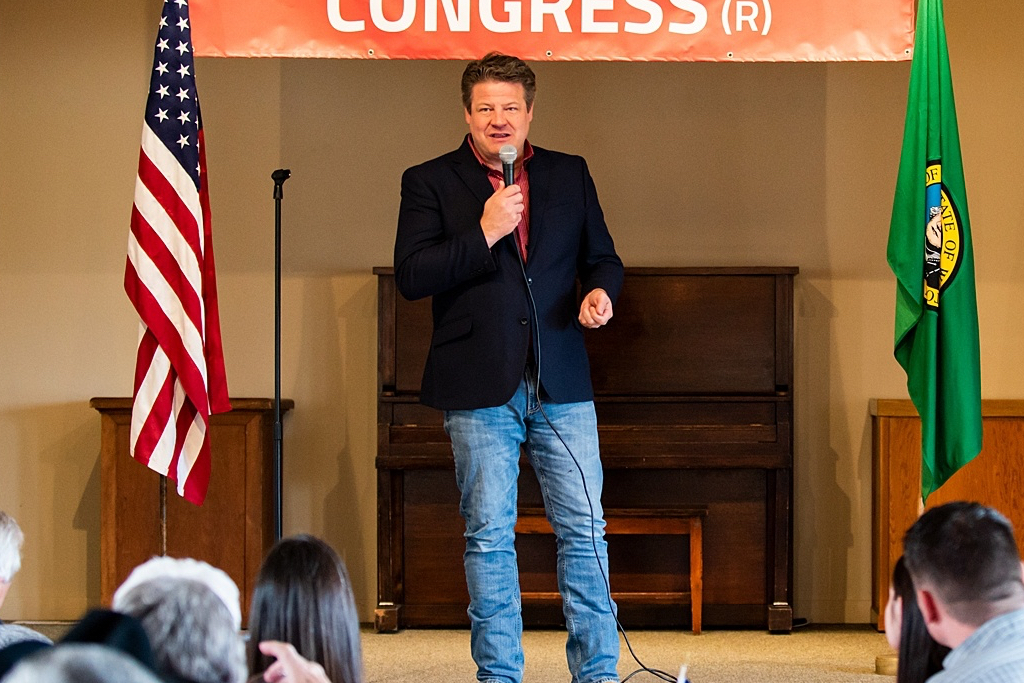 Schrier herself, the memo continues, has an “underwhelming image.”

“Schrier is well-known, but has an underwhelming image. Her 83% name ID is solid, but only 42% are favorable while 26% are unfavorable,” Bolger continues. “Her image is maxed out with her Democratic base, but she’s only at 33% fav/29% unfav with Independents.”

There are only two Republicans who seem to have a shot at facing her in the general election in November, Jensen and Dunn.

“The Washington primary system sends the top two finishers, regardless of party, to the general election,” the polling memo continues. “As the incumbent, Schrier is well below 50%, polling 44%. An incumbent to be that far below 50% portends a close race. Jensen and Dunn are both in the low teens, while Matt Larkin, Scott Stephenson, and Independent Justin Greywolf do not break out of low/mid-single digits. Only 24% of Independents vote for Schrier, and undecided voters are unlikely to vote for her. Biden’s approval rating among undecided voters is terrible, at just 11% approve/87% disapprove.”

As it stands right now, the polling memo states they are both about at the same place when facing off with Schrier. “They both trail her 42%-48%, which means, despite being an incumbent with high name ID, Schrier is in for a tight race,” Bolger writes.

But, if Schrier unloads opposition research on Dunn in a general election matchup versus going against Jensen, Jensen fares far better in the general than Dunn per the polling.

“We tested likely hits against all three candidates, and Dunn comes out the worse for the wear,” Bolger writes. “In a hypothetical three-way ballot, Schrier polls 45%, Jensen gains to 30%, and Dunn drops to 11%. In two-way informed ballots, the Jensen-Schrier two-way tightens to 43% Jensen/46% Schrier, while the Dunn-Schrier two-way opens up to 37% Dunn/49% Schrier.”

With Overturn Of Roe, U.S. Will Have Looser Abortion Laws Than Europe