An Illinois police officer fatally shot a man Thursday after the suspect arrived at a traffic stop involving another motorist and charged the officer with a hatchet, police said.

The fatal shooting happened in Naperville, some 33 miles west of Chicago, at around 11:00 a.m., the Naperville Police Department (NPD) announced in a press release. Police said preliminary information indicated that while a 22-year veteran of the police force was conducting a traffic stop near McDowall Road and Bond Street, “an unrelated vehicle” arrived at the scene and parked next to the car that was pulled over.

A white male suspect “quickly” hopped out of the vehicle “and charged at the officer” while wielding a hatchet, NPD Chief Jason Arres said at a brief press conference. The officer, who was not injured in the incident, then shot the suspect who was pronounced deceased after being conveyed to a local hospital, police said.

A still body camera image shared in the press release, seen below, shows the suspect with a hatchet in hand appearing to approach the officer. Authorities have not yet publicized the man’s identity, but the release disclosed he was in his 20s. 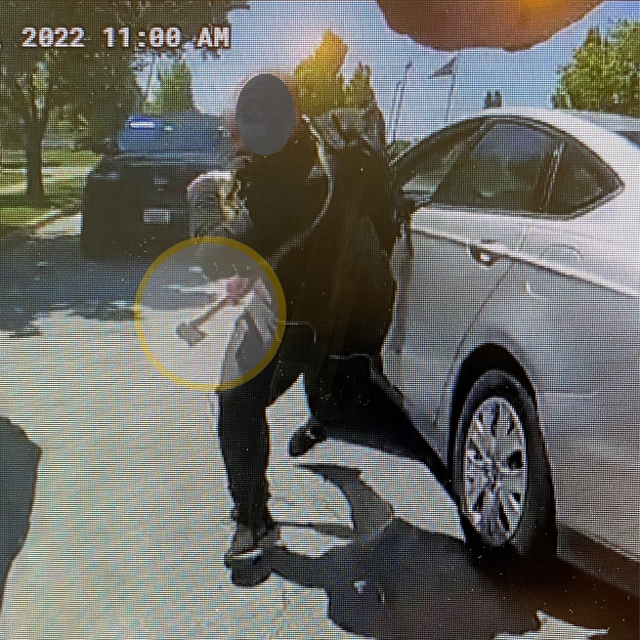 The NPD immediately alerted the DuPage County State’s Attorney’s Office and DuPage County Metropolitan Emergency Response and Investigative Team (MERIT) to the officer-involved shooting and have launched a joint investigation into the matter, according to the release.

Chief Arres makes a brief statement about the officer-involved shooting that occurred this morning near McDowell Road and Bond Street … pic.twitter.com/LejAccQzx0

Police are looking into if the deceased suspect had a relation to the individual involved in the traffic stop, WLS reported. The outlet noted that a large police presence was observed near the scene by the early afternoon:

Squad cars, large police vehicles, a robot and officers in protective gear could be seen in the area near Route 59 and Diehl Road about 1 p.m. They removed multiple bags and suitcases from the suspect’s car, placing them on the ground to be x-rayed.

Among the items recovered was an ax, though it is unclear if it was the hatchet he used to allegedly charge the officer, according to WLS.

The outlet also reports having caught up with the suspect’s brother.

“We are sorry to everyone involved,” he said.

The incident follows another fatal officer-involved shooting of an alleged hatchet-wielding suspect in February. Authorities said convicted sexual assailant Aian Thomas Tracy, 32, struck a Cheboygan County sheriff’s deputy in the neck with a hatchet. Thomas was then fatally shot, and the deputy was rushed to a hospital with non-life-threatening injuries.

Tear Down That Covid-Testing Wall for Commercial Flight