How useful are polls? Not very, according to a valuable analysis conducted by the Niskanen Center.

The opinion-measuring business is plagued by a pronounced decline in the number of willing survey respondents. Non-response rates are high. Those who do take the time to talk to pollsters are unlikely to represent the broader public. They’re disproportionately more educated and politically engaged than the universe of potential voters. As a result, polling captures the most polarized elements of the American electorate, which contributes to the illusion that the country is hopelessly polarized.

That is a problem for a pollster who sets out to measure the sentiments of all American adults on any given issue. But there’s still value in taking the temperature of the nation’s most engaged voters, particularly when you know that’s the audience you’re surveying. That’s probably a helpful framework to keep in mind when perusing the results of Pew Research Center’s latest round of issues polling, which highlights not just the partisan distinctions among U.S. adults but also the essential philosophical divides between right and left.

First, even among those who take the time to participate in a poll, there is a striking degree of unanimity around the public’s distrust and dissatisfaction with governing institutions. Americans of all ideological stripes distrust the government, don’t believe it is “careful with taxpayer money,” and think it shows little regard for issues affecting “people like you.” Overwhelming majorities say that the government should play a “major role” in preventing Americans from coming to harm as a result of externalities: terrorism, illegal immigration, extreme weather events, public health threats, and the like. Where there is disunity, it tends to revolve around whether the government should be involved in protecting Americans from themselves.

Overall, nearly 60 percent of all Americans believe “laws to protect people from themselves are necessary,” but the partisan distinctions are stark. Nearly eight-in-ten Democrats subscribe to that idea while over 60 percent of Republicans disagree with it. What we’re likely measuring here isn’t a sentiment with practical applications. For example, polling has found that Republican voters support so-called “red flag laws,” which allow concerned family members or law enforcement to temporarily remove firearms from people deemed to be a risk to those and others. What we’re measuring is a philosophical outlook that privileges personal responsibility above the collective. And as “red flag laws” put the onus on individuals and communities to police their own, that very much comports with this outlook even if such measures infringe on personal liberty.

It’s also a slightly more coherent ideological perspective than the one attributable to self-identified Democrats. According to this poll, Democrats are committed to government intervention in all the spheres of private life Pew tested, but they also express little confidence that governing institutions, politicians, or civil servants will intervene competently.

Overall, though, Pew found several areas of consensus, albeit on matters that will likely frustrate Democratic ambitions. Only 21 percent of respondents agree to some degree with the statement, “the federal government does a lot of good things it doesn’t get enough credit for.” Only three-in-ten Democrats agreed with that statement, in whole or part, and Republican support for that view was negligible. Both Democrats and Republicans generally disagree with the notion that the federal government is struggling with conditions that are “more difficult than they were two decades ago,” and Pew found almost no partisan disagreement over the idea that “people aren’t willing to pay for the things they want the federal government to do.”

With the Niskanen Center’s caveats in mind, we can draw a few conclusions about the shared experience of Americans with differing political and philosophical outlooks. Their goals for government are generally aspirational, but their assessment of the government’s performance is far more practical. The American political divide still forms around the gulf between personal and public responsibility. And Americans of all political stripes are uniquely mistrustful of government, even those who would like to see it assume more of the risks born by average Americans.

This dynamic is not so different from that which prevailed during the second half of the 20th century. For all the talk of the revolution remaking partisan dynamics in the United States, Americans’ philosophical outlook on the workings of government remains relatively unchanged. 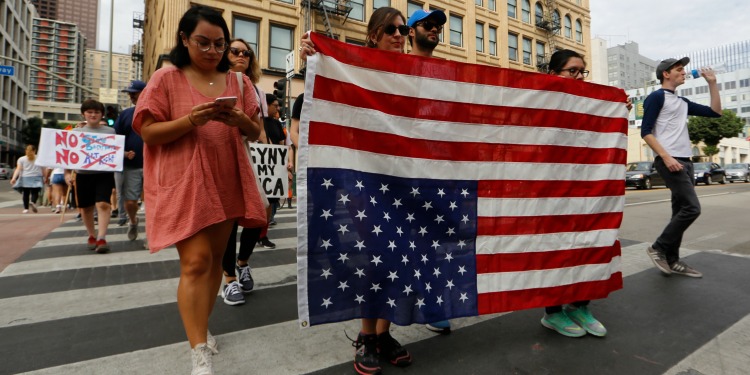 Democracy Dies At The Hands Of The Washington Post

Your Flight Is Delayed. Thank the Feds.