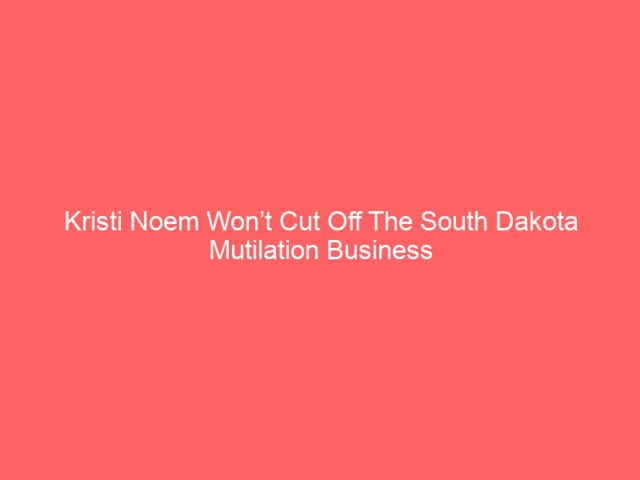 It’s curious that in one of the reddest states in the nation, which boasts both a Republican governor and a whopping 90 percent GOP majority legislature, the child-mutilation business would be allowed not only to exist but to flourish. Governor. Kristi Noem’s repeated failures to cut ties with radical gender ideology and its proponents, next week two of South Dakota’s government contractors will host a “Midwest Gender Identity Summit” in the Mount Rushmore State.

The event — hosted by Sanford Health, the Dakotas’ top health care system, and the Transformation Project, a radical transgender ideology activism organization that targets children — is aimed at medical professionals and purportedly seeks to “review the needs of transgender patients in healthcare.”

One of the summit’s co-hosts, the Transformation Project, is responsible for aiding what The Washington Post called an “advocacy campaign that has made cherry-red South Dakota the unlikely epicenter of a transgender uprising on the American Great Plains.”

When reports surfaced that the South Dakota government funneled $136,000 to the Transformation Project via a government contract for a community health worker program, Noem’s office rightly demanded the Department of Health quickly cut…

Is Donald Trump really interested in being president? | IN THEORY

Brickbat: Keep the Sail on

ChatGPT: Where does it fall on the Political Compass