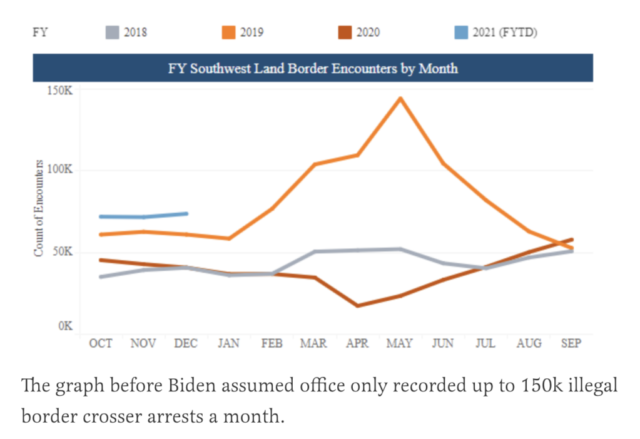 After U.S. Customs and Border Protection recorded 251,487 illegal migrants being detained at the southern U.S. borders in December, it is the worst month of illegal immigration in American history.

The influx was so large that CBP had to change the graph it uses to record “Southwest Land Border Encounters” for the fourth time since Biden was inaugurated in January 2021.

Border towns are “on the brink of collapse” and at least 1.2 million “gotaways,” border crossers who were spotted by border agents but not detained or screened, are floating around the United States. Yet, instead of reporting on the effect Biden’s border crisis is having on Republicans and Democrats alike, corporate media are carrying water for Biden.

Biden had not acknowledged the problem he created at the border in 2021 when he was elected to office until his January visit to El Paso. Now, Biden is back to ignoring the border, and his allies in the corporate media — whose previous border coverage largely focused on lies like the bogus migrant whipping story — are doing the same.

Honoring those who served this Veterans Day – One America News Network

Bakhmut, Svatove and other events indicate that long-frozen line are moving.