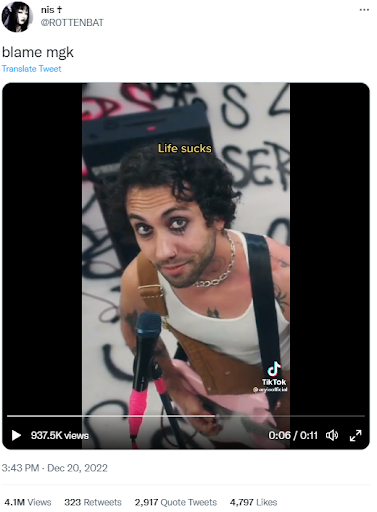 The white walls of a studio sound stage are covered in black and pink graffiti as a grown man wearing elaborate eye makeup and a pair of brown workman’s coveralls approaches a black microphone wrapped in neon-pink duct tape and sings: “This sh-tty state is full of losers and I pretended to ever f-cking like you / I swear to God I’m gonna get out of here someday ’cause if I can’t I’ll f-cking end it.”

Aryia is the person who sang the incoherent lyrics. She is an independent musician and social media personality, with hundreds of thousands and subscribers on multiple platforms. Aryia came to my attention when an anonymous Twitter user’s post lamenting his derivative creative efforts went semi-viral on the platform.

The song in question, “Losers,” relays an increasingly typical sound from musicians and performers who overwhelmingly rely on algorithmic social media curation to bolster their careers. People will click on something that is superficially similar to the commercially viable trend.

Although the song is intended to communicate organic interpersonal and inner frustrations, it lacks any artistic substance and relies only on aesthetic tropes. It is entirely dependent on musical cliches.

California Congresswoman Porter Punishes Her Staffer For Giving Her COVID