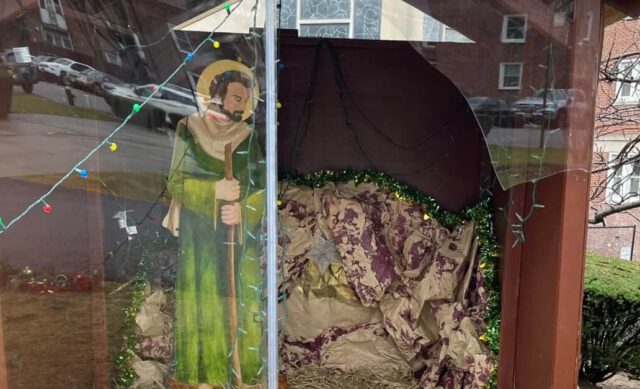 Two individuals vandalized the display on January 5th between 7:50 and 9.50 p.m.

The vandals tore down the protective plastic covering and tore off the Christmas lights before bringing the figures down.

John Quaglione was the Roman Catholic Diocese Brooklyn’s deputy press secretary. He told QNS the nativity had been fixed since then.

“One of them went inside the nativity and pulled the figures off of Blessed Mother and baby Jesus which were nailed to the wooden platform,” Quaglione said. “They then destroyed all the light decorations outside and inside.”

After telling Republicans to “head down to Florida,” New York Governor Hochul said that the state must figure out how to stop people leaving. The two suspects were captured arriving on a scooter at 7.53 p.m., and returning to their vehicle at 9.45 p.m. with two scooters.

The photos and descriptions of the suspects were not made public.

No arrests were made.

John Kasich on Trump, Country-Huge Divisions & Targets of the Press | THE CIRCUS | SHOWTIME

Neymar Girlfriend 2022: Who is He Now Dating After Bruna Biancardi