In a social media post, the company stated it was “deeply saddened by” Cook’s death and noted that her “face was sketched to become the iconic Gerber logo more than 90 years ago.”

“We extend our deepest sympathies to Ann’s family and to anyone who had the pleasure of knowing her,” the announcement added. The company did not specify the date of her passing.

Cook, born in 1926, became the Gerber logo after her face was sketched by neighbor Dorothy Hope Smith, who submitted the portrait in a 1928 contest Gerber held “to find a face to represent a baby food advertising campaign,” the company’s website states.

Smith entered the simple charcoal sketch in the competition against intricate oil paintings and planned to fine-tune the illustration if it was selected for the campaign. The portrait of Cook won over the judges, who did not want Smith to elaborate on the sketch, and ultimately used it as it was for its advertising campaign, Gerber notes. 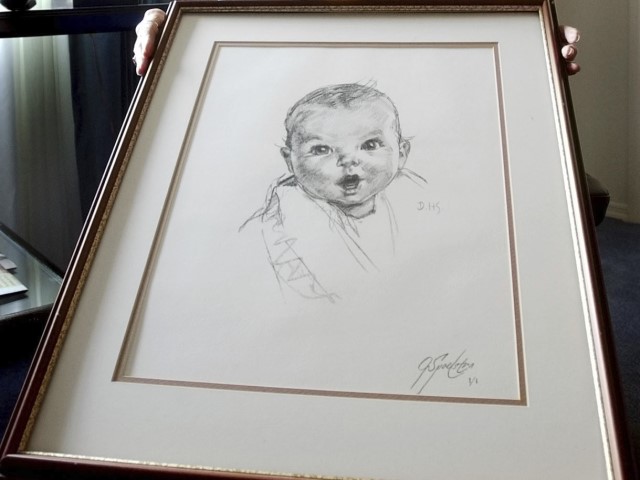 Ann Taylor Cook poses at her Tampa, Florida, home Wednesday afternoon, February 4, 2004, with a copy of her photo that is used on all Gerber baby food products. (Chris O’Meara, File/AP)

By 1931, the company adopted the portrait as its trademark after it gained immense popularity. “Since then, the Gerber Baby has appeared on all Gerber packaging and in every Gerber advertisement,” the company says.

The identity behind the renowned logo was not revealed until 1978, exactly 50 years after Gerber held its advertising campaign contest. Prior to Cook’s identity coming to light, there was intense interest as to whose infant face was the baby food brand’s logo, and a poll was even conducted where participants guessed who the child was. Responses to the survey included guesses like the late Republican senator for Kansas Bob Dole, Elizabeth Taylor, and Humphrey Bogart, according to Gerber.

“I have to credit Dorothy with everything,” Cook told the then-St. Petersburg Times in 1992. “I was really no cuter than any other baby, but she had wonderful artistic talent and was able to draw a very appealing likeness.”

In her adulthood, Cook became a mother and had a career as a mystery novelist, writing the Brandy O’Bannon series, among other novels. She also worked as an English teacher and would have turned 96 on November 20.

As Russia finally gains ground in eastern Ukraine, a reminder why it matters little