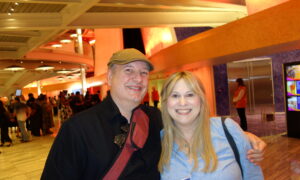 ORLANDO, Fla.—Albert Palmisano, pianist, instructor and music director, and his wife Laurie Palmisano, singer and assistant director at United Methodist Church, were amazed by Shen Yun Performing Arts at Dr. Phillips Center for the Performing Arts in Orlando on May 20.

Mrs. Palmisano said, “They were incredible. … The dancing and the physicality of the entire show was just amazing,”

Based in New York, Shen Yun Performing Arts is the world’s premier classical Chinese dance company. Along with folk dances and solo performances, the production depicts story-based pieces that tell stories from ancient times to the modern times. According to the company’s website, the performance this year demonstrates “China before communism.”

Mr. Palmisano said, “It was a wonderful expression of a dream that China has had for such a long time, and a beautiful cultural event that just crosses the polarizations that this world has become.”

Mrs. Palmisano also commented on Shen Yun’s ability to bring love and unity to its shared audience through performance. “I think it unites everybody: the music and the passion in the dance,” she said. “looking around and hearing people just gasp and take it all in—it’s just such a beautiful expression of love and joy.”

As a professional musician, Mr. Palmisano admired Shen Yun’s live orchestra. He said the orchestra was “jubilant, poignant and witty,” and the musicians “profess love through their instruments.”

One of Shen Yun’s unique features is its orchestra. It’s the first in the world to permanently combine classical Western and Chinese instruments within a Western symphony orchestra. Shen Yun also boasts virtuoso vocalists who sing Chinese lyrics using the bel canto style.

Mrs. Palmisano said, “The opera singing was beyond joy when he went up to those high notes. … He was magnificent.”

“That purity just enveloped you into his music. It was beautiful.”

China was once known as “The Land of the Divine,” and Shen Yun presents this culture by drawing upon the Middle Kingdom’s Buddhist and Daoist philosophies. In the past, artists looked to the divine for inspiration and cultivated virtue in order to create uplifting art.

Today, Shen Yun’s artists follow in this noble tradition, which is why audiences feel there is something different about Shen Yun, the company’s website explains.

Mrs. Palmisano said, “I felt light, light within me and [from] the performers internally; light … just radiates from the dancers on the stage. Their radiation of light, which to me, is part of the Divine, … and so I felt that throughout the entire performance.”

“I admire their work—the hours that they must put in, the physicality of it all, and then seeing it all together, … it just filled my heart and it was beautiful,” she said.

The Epoch Times is a proud sponsor of Shen Yun Performing Arts. We have covered audience reactions since Shen Yun’s inception in 2006.

EXTRA: Presidents Washington & Lincoln Order Nation to Give Thanks to God

An Act of Evil in New York City