Defence Minister Sergei Shoigu told President Vladimir Putin that Russia’s troops together with members of a local separatist militia “have established full control over the city of Lysychansk,” a ministry statement said.

Taking Lysychansk constitutes “the liberation of the Luhansk People’s Republic,” one of two separatist regions in Ukraine that Russia recognizes as sovereign, the statement said.

Ukrainian fighters spent weeks trying to defend Lysychansk and to keep it from falling to Russia, as neighbouring Sievierodonetsk did a week ago. A presidential adviser predicted late Saturday that the city’s fate could be determined within days.

Ukrainian officials did not immediately provide an update on its status.

Earlier Sunday, Luhansk’s governor said Russian forces were strengthening their positions in a gruelling fight to capture the last stronghold of resistance in the province.

“The occupiers threw all their forces on Lysychansk. They attacked the city with incomprehensibly cruel tactics,” Luhansk governor Serhiy Haidai said on the Telegram messaging app. “They suffer significant losses, but stubbornly advance. They are gaining a foothold in the city.”

A river separates Lysychansk from Sievierodonetsk. Oleksiy Arestovych, an adviser to the Ukrainian president, said during an online interview late Saturday that Russian forces had managed for the first time to cross the river from the north, creating a “threatening” situation.

Arestovych said they had not reached the centre of the city but that the course of the fighting indicated the battle for Lysychansk would be decided by Monday.

Luhansk and neighbouring Donetsk are the two provinces that make up the Donbas, where Russia has focused its offensive since pulling back from northern Ukraine and the capital, Kyiv, in the spring.

Pro-Russia separatists have held portions of both eastern provinces since 2014, and Moscow recognizes all of Luhansk and Donetsk as sovereign republics. Syria’s government said Wednesday that it would also recognize the “independence and sovereignty” of the two areas.

An occupation of Lysychansk would open the way for the Russians to move west into Donetsk province, where the sizable Ukrainian-held city of Slovyansk has come under rocket attacks several times since Russia invaded Ukraine on Feb. 24. 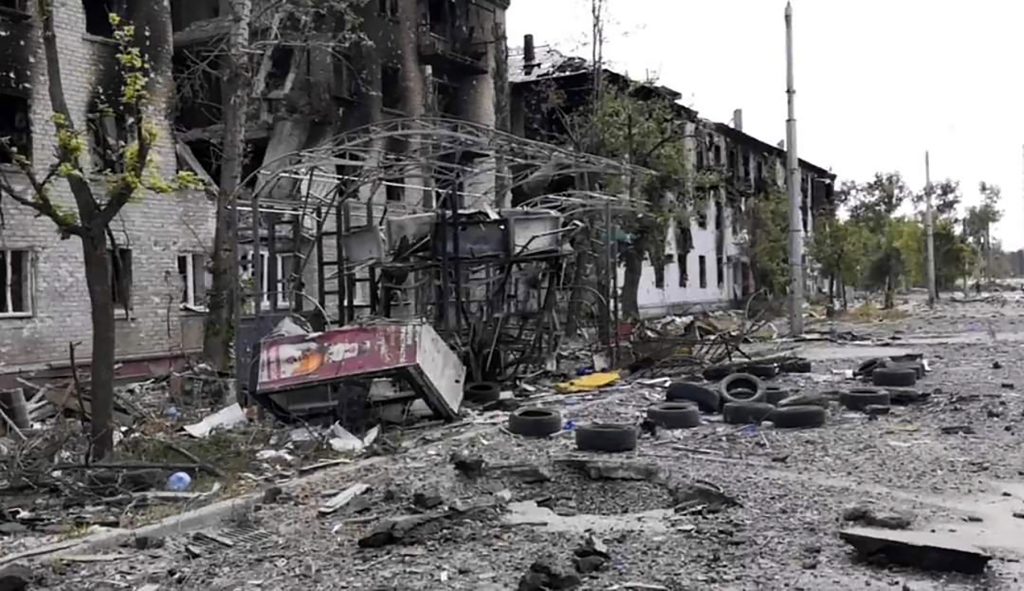 In this photo provided by the Luhansk region military administration, damaged residential buildings are seen in Lysychansk, Luhansk region, Ukraine, early Sunday, July 3, 2022. Russian forces pounded the city of Lysychansk and its surroundings in an all-out attempt to seize the last stronghold of resistance in eastern Ukraine’s Luhansk province, the governor said Saturday. A presidential adviser said its fate would be decided within the next two days. (Luhansk region military administration via AP)

Elsewhere in the war, the exiled mayor of the Russia-occupied city of Melitopol said Sunday that Ukrainian rockets destroyed one of four Russian military bases in the city.

The Russian Defence Ministry said Ukraine also launched missile and drone attacks in western Russia, on the cities of Kursk and Belgorod, but that the aerial weapons were shot down. Kursk regional governor Roman Starovoit said the town of Tetkino, on the Ukraine border, came under mortar fire.

The leader of neighbouring Belarus, a Russian ally, claimed Saturday that Ukraine fired missiles at military targets on Belarusian territory several days ago but all were intercepted by an air defence system. President Alexander Lukashenko described the alleged strike as a provocation and noted that no Belarusian soldiers were fighting in Ukraine.

There was no immediate response from the Ukrainian military.

Belarus hosts Russian military units and was used as a staging ground for Russia’s invasion. Last week, just hours before Lukashenko was to meet with Russian President Vladimir Putin, Russian long-range bombers fired missiles on Ukraine from Belarusian airspace for the first time.

Lukashenko has so far resisted efforts to draw his army into the war. But during their meeting, Putin announced that Russia planned to supply Belarus with the Iskander-M missile system and reminded Lukashenko that his government depends on economic support from Russia.

Ukraine “says they are protecting us, but what kind of protection is this?” asked one man, who did not provide his name to AP.

“They kneel to that Biden – may he die!” exclaimed his neighbour, Tatyana, referring to U.S. President Joe Biden.

The Drag Stripper In Full Panicked Retreat After Dancing for Children Tells Us a...

Biden Gets Bad Response From Protesters and Other Countries at ‘Summit of Americas’ –...