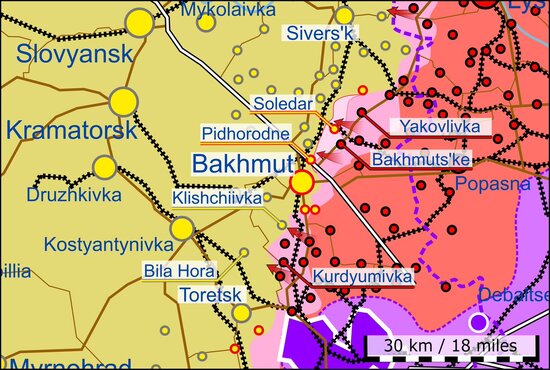 Poland’s PM Morawiecki revealed yesterday that President Duda is helping him in the negotiations to create an international coalition for joint transfers of Leopard 2 tanks to Ukraine.

The next Ramstein meeting of Ukraine’s allies is January 20. If not before, I’d be surprised if the allies don’t make an announcement there. With American M2 Bradley infantry fighting vehicles on their way, the taboo against modern heavy armor has been busted, and there’s no rational reason for the allies to hold out on the Leopards.

See also Mark’s great writeup on Ukraine’s need for the tanks here, one of his best pieces on the war (and given his consistently high quality, that’s saying something).

All indications point to Soledar’s difficult situation, but it is under control. Russian sources even confirm the situation. backed off There are claims that the main suburb of Bakhmut has been affected by a break in the Ukrainian line.

We’ve seen large industrial facilities serve as key strongholds throughout this entire war, from Mariupol, to Severodonetsk, to the industrial zone in Bakhmut. Soledar’s salt mine. Like the Azovastal steel factory in Mariupol, the salt mine has a network of underground facilities (Wagner’s chief called it an…