U.S. officials said Thursday that the Taliban has not officially requested assistance in the aftermath of a powerful earthquake in eastern Afghanistan on Wednesday that reportedly killed over a thousand people.

The confused disaster response from the extremist regime left rescuers scrambling to dig through the rubble with their hands.

Afghanistan has been cut off from much international financial assistance ever since the Taliban conquered the country by force in August 2021, following U.S. President Joe Biden’s disastrous military withdrawal.

Taliban Supreme Leader Haibatullah Akhundzadah made an unusual public appearance on Wednesday to ask the international community to “help the Afghan people affected by this great tragedy, and spare no effort.”

“When such a big incident happens in any country, there is a need for help from other countries. It is very difficult for us to be able to respond to this huge incident,” Taliban Prime Minister Mohammad Hassan Akhund said at an emergency meeting in Kabul.

Several countries quickly offered millions of dollars of disaster relief, including the European Union, India, Pakistan, South Korea, and Japan. However, U.S. Deputy Special Representative to Afghanistan Ramiz Alakbarov said on Wednesday the Taliban has not “formally requested that the U.N. mobilize international search-and-rescue teams or obtain equipment from neighboring countries to supplement the few dozen ambulances and several helicopters sent in by Afghan authorities.”

Alakbarov feared the earthquake would “add a lot to the daily burden of survival” in Afghanistan, which was already a humanitarian crisis zone.

U.N. officials confirmed on Wednesday they had not received a request from the Taliban regime to mobilize search-and-rescue teams or bring in rescue equipment from other countries. 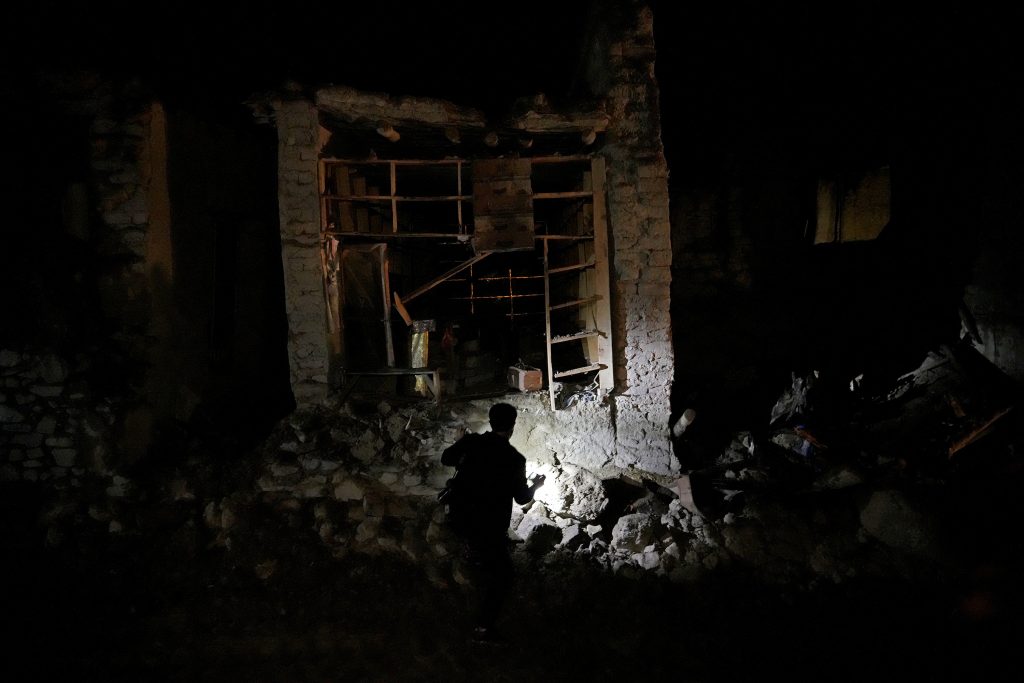 The Associated Press (AP) quoted U.N. officials and humanitarian aid agencies who said the Taliban does not appear to be interfering with their efforts in the earthquake zone, but they are not doing much to help, either.

The Taliban defense ministry claimed it sent dozens of helicopters with emergency relief supplies, but on Thursday, AP reporters saw Taliban fighters doing little except driving around hard-hit Paktika and Khost provinces to ogle the damage:

Under a leaden sky in Paktika province, the epicenter of Wednesday’s earthquake where hundreds of homes have been destroyed, men dug several long trenches on a mountainside overlooking their village. They prayed over around 100 bodies wrapped in blankets and then buried them.

In villages across Gayan District, toured by Associated Press journalists for hours Thursday, families who had spent the previous rainy night out in the open lifted pieces of timber of collapsed roofs and pulled away stones by hand, looking for missing loved ones. Taliban fighters circulated in vehicles in the area, but only a few were seen helping dig through rubble.

There was little sign of heavy equipment — only one bulldozer was spotted being transported. Ambulances circulated, but little other help to the living was evident.

“We ask from the Islamic Emirate and the whole country to come forward and help us. We are with nothing and have nothing, not even a tent to live in,” said one forlorn survivor. The “Islamic Emirate of Afghanistan” is the Taliban’s name for its government.

“The rescue operation has finished, no one is trapped under rubble,” said a Taliban military spokesman.

At the same moment, Taliban foreign ministry spokesman Abdul Qahar Balkhi was demanding more aid from other countries, with no conditions attached — and he wanted much more than food and medicine.

“We call on natural disaster management agencies and the international community to provide immediate and comprehensive aid to the Afghan people on the basis of humanitarianism, so that the victims are able to financially rebuild their livelihoods,” Balkhi said.

Deer Shows Off Her New Fawns to Golden Retriever Friend