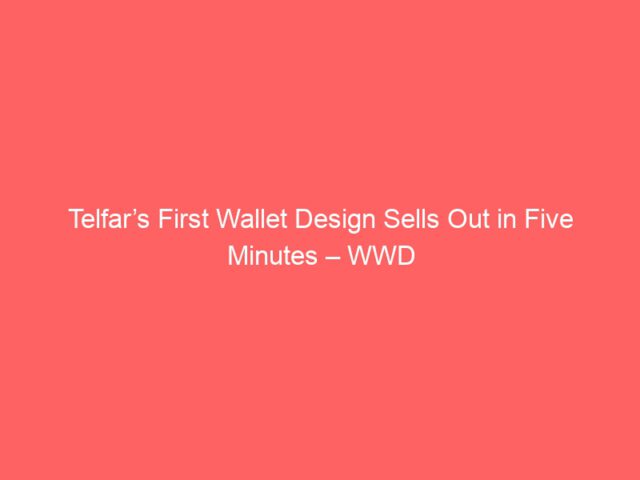 Telfar introduced his very first wallet on Monday and, much like his bags, they sold out quickly — in five minutes flat.

Babak Radboy, Telfar creative director, said that this was not the intention. “We had ordered the wallets in 17 colors — so that unlike the bags they could stay up on the site for a while,” he said.

While the label declined to reveal exactly how many wallets were sold, Radboy said it was “thousands and thousands.”

The wallets are made of leather and were offered in colors spanning from black to seafoam green — all priced at $144. StockX already has the design and some sellers are asking for a minimum of $1,500 to buy it.

The Telfar wallet’s success demonstrates how New York-based founder Telfar Clemens – he of Liberian descent who was raised in Lefrak City, Queens — continues to hold the attention of a highly invested and loyal community. Clemens was unable to comment as he celebrated his birthday Monday.

The brand’s covetable nature has only been boosted by its new wallets selling out so quickly. Telfar quickly became a topic on Twitter soon after its release at noon. Fans lamented the fact that their carts suddenly ran out as they tried to check out …..

A woman allegedly met an 87-year old Holocaust survivor through a dating site and...

The Pre-Pandemic That Drove Critical COVID-19

What FX’s ‘The Patient’ Has To Say About Therapy, Violence, And The Masculinity Crisis