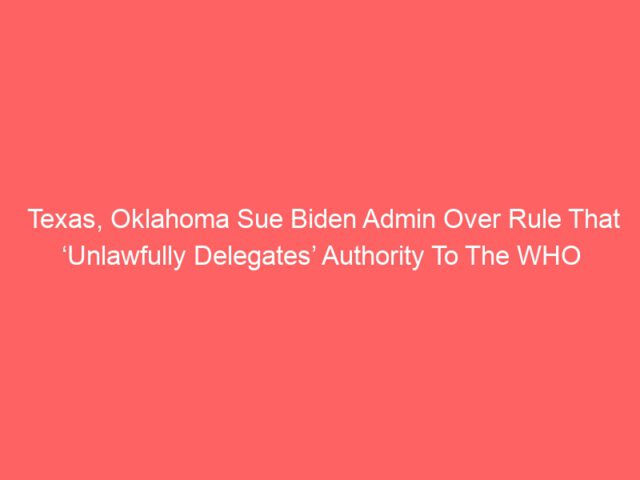 According to a copy of a complaint obtained by Daily Caller News Foundation from Texas, Oklahoma and Texas are suing Biden Administration over a rule governing public health that they say illegally grants power to the World Health Organization.

The states accuse the Department of Health and Human Services (HHS) of “unlawfully” delegating the authority to declare a public health emergency in the U.S. to the WHO, according to a copy of the complaint. The plaintiffs assert that a 2017 rule relinquishes HHS authority to the WHO to determine when there’s a public health emergency involving a communicable disease in the U.S.

HHS’ definitions for the declaration come directly from the WHO, the complaint asserts.

“The Department’s definition of ‘public health emergency’ … exceeds the agency’s authority, as it unlawfully delegates to the World Health Organization (WHO) the authority to invoke emergency health powers in the United States — infringing on U.S. and state sovereignty,” the complaint says.

The petition was filed by the states in July seeking to repeal the rule. According to the complaint, Biden denied the request. Now, they’re seeking court intervention to declare the…

Despite Reform Efforts D.C. Transit Authority Continues to Fail despite All the Efforts