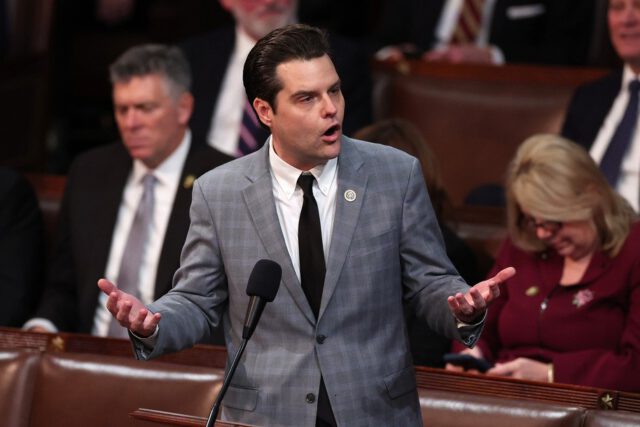 The House of Representatives doesn’t have a speaker. The 20 or so Freedom Caucus members holding up the proceedings realize that they, like the Republican Party itself, don’t believe in majority rule. They have been encouraged by the fact the Republican establishment has kowtowed for the past ten years.

Of course, that doesn’t mean that the craven establishment leaders don’t want to remain in power—or at least It seems To stay in power. On Friday, Florida man Rep. Matt Gaetz stood up to nominate—wait for it … wait for it—well, before he named his nominee for the speakership, Gaetz made a long speech attacking Kevin McCarthy, calling him the “LeBron James of special interest fundraising in this town.”

It’s Jim Jordan! Sorry, I couldn’t wait. He named the guy who stayed silent while young man after young man allegedly told him they were being sexual assaulted and abused by a wrestling team doctor. That’s Jim Jordan. However, at least half of the people on Gaetz’s side of the aisle were not simply unhappy about the nomination but clearly could not stand to sit through the more-than-five-minute cringeworthy speech Gaetz subjected everyone to—and they left!

Are Universities doomed to failure?