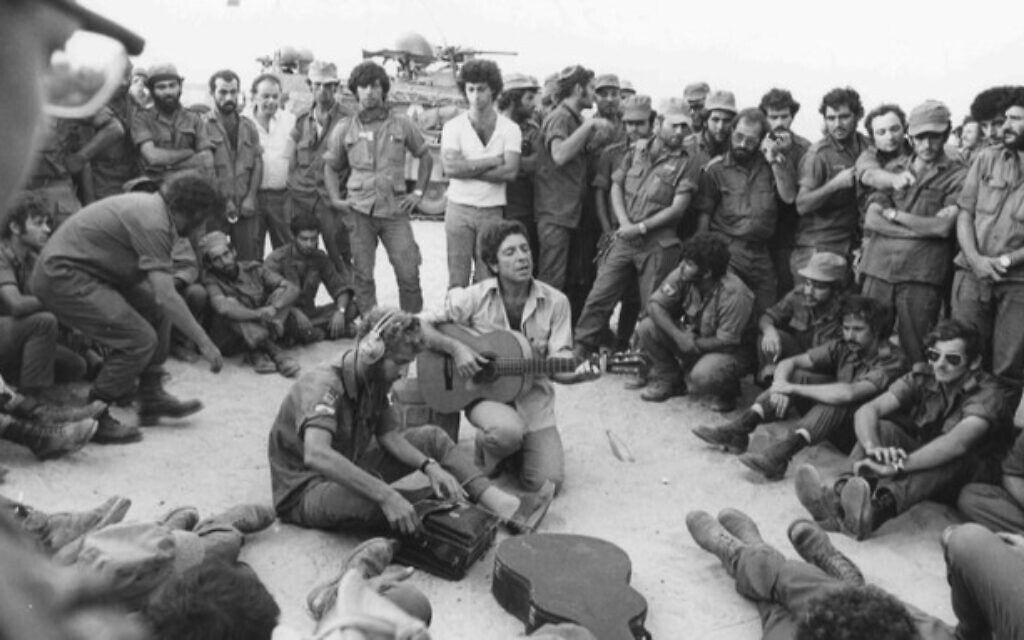 Less than two months into Russia’s brutal invasion of Ukraine, Kyiv—a town that many thought was on the verge of collapse just weeks earlier—received a pair of unusual guests. The presence of Bono and The Edge, the leading personalities of U2, must have seemed strange and otherworldly in a city still pockmarked by Russian bombardment. Their unannounced 40-minute “freedom” concert was held in a subway station. Bathed in purplish pink ambient light, the two musicians played acoustic versions of hits like ‘Vertigo,’ ‘Angel of Harlem,’ and ‘With or Without You,’ and ended the short set with a cover of ‘Stand By Me,’ substituting the lyrics “Stand by Ukraine.” As the Irish Times reported, Bono told the crowd: “The people in Ukraine are not just fighting for your own freedom, you are fighting for all of us who love freedom.”

In wartime, music and musicians have a unique ability to entertain and inspire, awe and soothe. Although U2 stole international headlines, Ukraine’s own Sviatoslav Vakarchuk—who is sometimes compared to Bruce Springsteen—also played for Ukrainian troops in the Donetsk Region, clad in a flak jacket and seated in an unassuming office chair. The 2022 Eurovision Song Contest, an annual event begun after World War II with the aim of knitting the continent together in a “pan-European” spirit, was won by the Ukrainian ensemble, Kalush Orchestra.

Although he could not have anticipated it when he was researching and writing, the symbolic timing and importance of Matti Friedman’s latest book, Who By Fire is particularly poignant. It tells the story of Leonard Cohen’s journey across the Sinai Desert, entertaining Israeli troops during the 1973 Yom Kippur War. Back then, it was Israel that had been invaded on the pretext of assuaging the fears of a larger nation, and it was Israelis who were fighting and dying in defense of their nation’s very existence and their right to self-determination.

The story of Cohen’s trip to Israel has been a source of unending Israeli fascination, but virtually no records of it remain, so reconstructing events was difficult for Friedman. However, thanks to the cooperation of Cohen’s estate, who granted the author access to the late songwriter’s personal diary, and the discovery of an unpublished manuscript buried in an archive outside Toronto, Friedman has been able to piece together a beautifully intimate portrait.

Until now, Friedman writes, the tour had “lived on as underground history—in word of mouth, in photographs snapped by soldiers, in notebooks filed in an office on Wilshire Boulevard in Los Angeles, in a box of papers in Hamilton, Ontario, and recorded between the lines of a few great songs.” A local edition of Rolling Stone contained “the only description of any of the concerts to appear in print at the time.” But the journalist mocked him as “the great pacifist,” apparently unmoved by the sight of Cohen performing ‘So Long, Marianne’ for young Israeli troops. “This song,” Cohen told his small audience, “is one that should be heard at home, in a warm room with a drink and a woman you love. I hope you all find yourselves in that situation soon.”

Many of them did not. The coordinated surprise attacks on Israel by Egypt and Syria were launched on Yom Kippur (or the Day of Atonement), the holiest day on the Jewish calendar. The country was fasting and praying and Israelis were caught off-guard. “The service, many hundreds of Hebrew pages, is like a slow drive through rolling liturgical countryside. It meanders for miles, crawling through land so featureless it can put you to sleep, hooking back on itself so that you wonder if you didn’t pass that same red barn an hour ago.” The astonishing success of the 1967 Six Day War had likewise lulled Israelis into a false sense of security—the Arab armies, they assumed, were simply no match for their own nation’s military superiority. “The symbolism here,” Friedman writes, “is so clumsy that it seems to beg an apology.”

Within hours of the 1973 invasion, however, Israel’s feared eye-patched general, Moshe Dayan, was warning that the “Third Temple,” (that is, Israel itself) was “in danger.” And this is where we encounter Cohen: at the intersection of existential dread and survival, life and death. Could an artist with Cohen’s preoccupations and temperament have been better suited to any situation than this one? Cohen was then estranged from his Jewish roots, but as the survival of the young Jewish state hung in the balance, he made his way back to what he called “my myth home.” He rarely spoke about the experience afterwards, but it’s clear from his personal writings that his relationship with Judaism and Israel was complex and, in its own way, profound.

This is one of the animating questions Who By Fire seeks to unpack. What persuaded Cohen, then comfortably ensconced on the Greek island of Hydra, to drop everything and travel to Israel in the middle of a devastating war? His life up until that point certainly didn’t suggest such a decision was especially likely. The singer-songwriter did come from a distinguished line of rabbis in Montreal, but he left the family business a long time ago and basically spurned his community.

Two episodes during the 1960s help to illuminate Cohen’s tortured relationship with Judaism. As a late-twenty-something, Cohen wrote a poem titled, ‘Lines from My Grandfather’s Journal,’ about Jewish existence, which would later appear in his second anthology, The Spice-Box of Earth:

I did not like to see the young men stunted in the Polish ghetto. Their curved backs were not beautiful. Forgive me, it gives me no pleasure to see them in uniform. I do not thrill to the sight of Jewish battalions. But there is only one choice between ghettos and battalions, between whips and the weariest patriotic arrogance.

Cohen’s sentiments are difficult to reconcile with a speech he gave just three years later that, Friedman writes, “enraged listeners in Montreal, dismissing the tidy edifice of the Jewish community’s life as a hollow perversion of their divine mission.” Nevertheless, for all the tortured talk of myth homes, ghettos, and grandfathers, Cohen felt a strong urge to travel to Israel once the 1973 war had broken out. “The relationship was tenuous,” Friedman writes, “like being in love with someone you don’t really know.”

And so, Cohen landed in Israel with no clear plans; he didn’t even bring his guitar. He visited a bohemian spot, Café Pinoti in Tel Aviv, where writers and artists hung out. There he met the Israeli singer Ilana Rovina who had just returned from the Sinai, where she had been playing for the troops. “When fighting starts, the country’s singers show up to play—it’s considered part of being a successful musician, a kind of tax you pay for not fighting yourself,” Friedman writes. The troupe was returning the following day. “Would I like to join them?” Cohen noted in his diary.

The experience would ultimately reinvigorate Cohen’s career. Just a few years earlier, Cohen had played to half-a-million people at the Isle of Wight Festival. But now, on the eve of the Yom Kippur War, he was lost and despondent. “I just feel like I want to shut up. Just shut up,” Cohen told one interviewer. With the benefit of hindsight, we now know he was wrong about his creative demise. “Cohen wanted a way out of his dead end,” Friedman remarks. “We know that he didn’t really give up in 1973. He was looking for a way to sing again and might have been seeking a revelation like one the Israelites had experienced long ago in Sinai. This was the place where he thought it could happen.” Or as Cohen recorded in his journal: “This is a place where you may begin again.”

Israeli authorities had withheld the extent of their military losses, so when the musicians piled into their dusty Ford Falcon and headed south for Sinai, they were unprepared for the extent of the devastation. This is where timelines and dates and locations become murky. Some soldiers recall seeing Cohen early in the conflict while others recall seeing him later, but it’s all a little hazy. A soldier named Shoshi tells Friedman that “someone came out of nowhere and said Leonard Cohen was in the base’s movie theatre. It was like news of an alien landing. What was Leonard Cohen doing here?”

As he regaled frontline soldiers with songs such as ‘Suzanne’ and ‘Bird on the Wire,’ the warzone experience quietly worked its way into Cohen’s consciousness. Snaking his way through the desert, the lyrics to a new song started gestating. In a notebook filled with doodles and musings, Cohen wrote a poem shortly after his entry about landing in Tel Aviv. It begins:

I asked my father I asked,
Him for another name,
I said the one I’ve got is soiled with fear and shame.

Friedman’s excitement at the discovery of this verse is palpable: “[Y]our breath catches, if you know Cohen’s work, because you’re watching the birth of something famous,” he writes. Fans will recognize this as an early version of ‘Lover, Lover, Lover,’ which debuted on the album New Skin for the Old Ceremony released the year after the war.

Cohen began performing it for the first time at Israeli airbases during the impromptu tour, in the hope that its “spirit” might be a “shield against the enemy.” Writing in his diary later, Cohen confided, “I said to myself, Perhaps I can protect some people with this song.” Indeed, in one of Cohen’s notebooks, Friedman has also discovered eight lines of the same song that were never published, titled ‘Air Base’:

These lines offer further evidence of Cohen’s complicated relationship to Israel and his own Jewishness, to patriotism and conflict. Although he wrote them, at some point he crossed out the words “my brothers” and replaced them with “the children” instead. “The lines might have been an authentic expression of a feeling Cohen had in the moment,” Friedman speculates, “but not of the way he felt when the war was over and he was back in the world.”

After the war, Cohen dropped the verse and the reference to “brothers.” In later appearances, he claimed that the song had actually been written for soldiers “on both sides.” One soldier Friedman interviewed, Shlomi, remembers hearing ‘Lover, Lover, Lover,’ on the radio after the war ended and was disappointed. “[T]he bastard changed the words,” he says.

Nevertheless, a unique and enduring bond between artist and nation was forged during those fraught weeks. “Today Cohen might be the foreign artist whose songs are translated and performed most often in Israel,” Friedman notes. The last time Cohen returned to Israel was in 2009 and he received a hero’s welcome. “The fact that Israelis have always considered Cohen to be a kind of Israeli is not only because he’s Jewish,” Friedman writes near the book’s end. “It is, at least in part, because of the memory that at one of this country’s darkest moments, he came.”

Closing out his concert in Jerusalem, Cohen raised his hand and parted his fingers like Spock in the sign of a Jewish blessing: “Live Long and Prosper.” Cohen, after all, was a member of the Jewish tribe of high priests, the Cohanim. Speaking “the archaic language of the synagogue and the Diaspora,” Friedman writes in closing, “he blessed the people, and left the stage.” It was one hell of an exit.

Joe Biden Is so Serious About Inflation That He Wants to Send You a Rebate Card to Help Pay for Your Gas, but Luckily He Can’t – RedState

Dems Push For Unlimited Abortion Against Most Americans’ Views

Sean Hannity: We are suffering through yet another anti-Trump smear