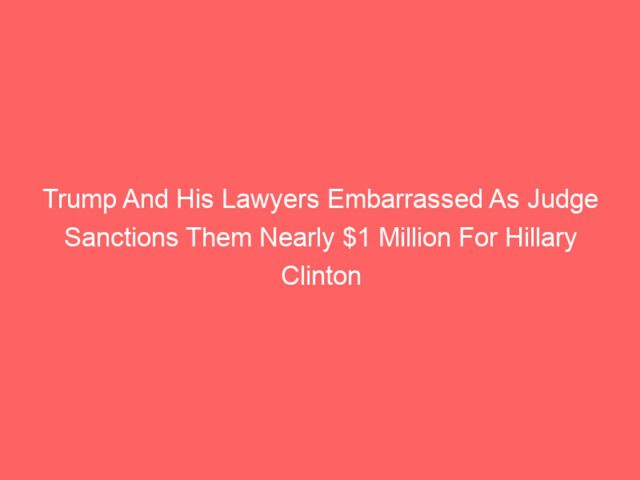 A federal judge on Thursday imposed nearly $1 million in sanctions on former President Donald Trump and his lawyer for filing a “frivolous” lawsuit against Hillary Clinton and others that claimed they tried to rig the 2016 presidential election in Clinton’s favor.

“This case should never have been brought,” wrote Judge John Middlebrooks in U.S. District Court for the Southern District of Florida in his order sanctioning Trump for the civil suit, which the judge previously dismissed.

“Its inadequacy as a legal claim was evident from the start. It would not have been filed by a reasonable lawyer. Intended for a political purpose, none of the counts of the amended complaint stated a cognizable legal claim.”

The point of such sanctions to hopefully deter other attorneys from filing frivolous lawsuits on Trump’s behalf. The same judge shredded the lawsuit when he initially dismissed it, and lawyers who filed lawsuits in other states based on Trump’s big lie have also been sanctioned.

Trump spent Thursday inadvertently admitting to inciting violence, while simultaneously trying to blame the media on using the term “the big lie ….”.

Former Bush Management Employee: I Can not Toughen Donald Trump This Fall