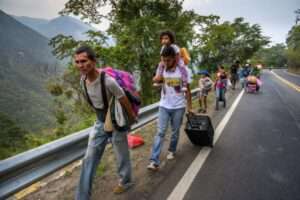 Recently, the Biden Administration modified the Uniting for Ukraine private sponsorship program for migrants to allow for a total of up to 35,000 monthly migrants from four Latin American nations: Cuba, Venezuela and Nicaragua. These programs allow migrants fleeing persecution, war and violence in their home countries to quickly obtain legal entry to the United States. They can also be allowed to work and live in the United States for up to two year if they have a sponsor who is willing to support them.

Twenty GOP-controlled states filed yesterday a lawsuit challenging legality of the program for four Latin American countries (though not Uniting for Ukraine). They claim that the program did not have proper congressional authorization and had to be subject to the “notice & comment” procedure under the Administrative Procedure Act. Ironically, these flaws are highlighted in the lawsuit by the statements made by the plaintiff governors about the dangers of socialism, and the urgency to address the crisis at South Border.

These private sponsorship programs are legalized by a 1952 law giving the attorney general power to use “parole”, to grant temporary residency to foreigners…

Elizabeth Warren Strikes for Washington DC Statehood; Gets Scrammed with the Constitution

The 22 most unhinged moments of “I Believe In Santa”