No one is responsible for an act of violence, or even an attempted act of violence, but the violent. Incendiary rhetoric that heightens tensions to the point that it risks agitating the already disturbed is reckless and irresponsible by its own rights, but rhetoricians are almost never liable for the behavior of the deranged. That is not, however, what Democrats or their allies in the press believe, as they often attest. To hold them to their own self-set standards would be to implicate the left’s rash indiscretion as a motivating factor for Supreme Court Justice Brett Kavanaugh’s would-be assassin.

Just before 2 a.m. on Wednesday, a 26-year-old California man was apprehended outside Kavanaugh’s Maryland home. After traveling across the country, the alleged gunman arrived outside Kavanaugh’s residence armed with a pistol and mountable handgun light, two magazines, a tactical knife, pepper spray, zip ties, a hammer, a screwdriver, a crowbar, a nail pouch, and duct tape. According to the affidavit, he planned the premeditated murder of the justice and whoever got in his way, and he planned to kill himself afterward. The alleged assailant told police he was motivated by his antipathy to, among other cases on the Court’s docket, a leaked draft of a possible High Court decision that would overturn the precedent established by Roe v. Wade.

To take the accused assailant at his word, he was animated by high-stakes political debates playing out in the Court, and he hoped this violent act would “give his life a purpose.” If the potential shooter had even casual contact with the heightened rhetoric around that draft decision, it’s not hard to see how he convinced himself that this terroristic act would be considered an act of virtue.

“[I]f you are able to afford it, and if it is safe for you to do so, you should consider arming yourselves, then finding others to train with in teams and learn how to defend your community,” wrote Chelsea Manning in a viral tweet on the night of the draft decision’s reveal in the press. “We may need these skills in the very near future.” Manning might be a fringe figure, but this was hardly a fringe opinion. “Good,” replied the Nation’s Washington D.C. correspondent in reaction to a comment envisioning threats to conservative justices and their families as a result of the leak. The leak “will foster anger and distrust within the irredeemable institution that is the Supreme Court,” Vox.com justice correspondent Ian Milhiser wrote in a series of now-deleted tweets. He applauded the actions of what he assumed was someone within the institution who decided to “burn this place down,”

If this was just a fit of pique, activist organizations did their best to preserve their state of agitation. The group “Ruth Sent Us” soon published a list of the Court’s conservative justices’ home addresses and urged their followers to “rise up to force accountability using a diversity of tactics.” Hundreds did just that, targeting Kavanaugh with particular ferocity. “For the protesters chanting loudly outside Justice Brett M. Kavanaugh’s home,” the New York Times reported, “incivility was the point.” Demonstrators willingly confessed to reporters their intention to menace the justices and their families.

These frightening (and likely illegal) tactics were condoned in the left-leaning press. “The suggestion that we can just vote this problem away ignores the fact that the people who promise to fight for abortion rights have failed again and again to uphold them,” The Cut’s Claire Lampen opined. The system had failed, and Kavanaugh’s “fear” was due comeuppance. “Their decision will disrupt countless lives,” she concluded. “Theirs can withstand a little disruption, too.”

Asked about the threatening displays, White House Press Sec. Jen Psaki could not initially muster any sympathy for the targeted justices. “Look, I think the president’s view is that there’s a lot of passion, a lot of fear, a lot of sadness from many, many people across this country about what they saw in that leaked document,” she said. And though they reliably expressed the caveat that demonstrations had to remain peaceful, too many Democratic lawmakers also declined to condemn these uncivil displays.

On May 13, the Department of Homeland Security warned law-enforcement agencies to brace for acts of extremism and violence ahead and in the immediate wake of a Supreme Court decision on Dobbs. They were right to do so. In the weeks since that leak, pro-life organizations and crisis pregnancy centers around the country have been targeted by vandals and arsonists. Those who warned that these expressions of violence had the potential to culminate in something far worse were routinely dismissed and shouted down by activists who believed they would benefit from the zeal on display in the streets.

We don’t have to imagine how Democrats and the left-leaning mainstream press would react if the partisan roles were reversed here. Republicans’ violent rhetoric and its potential to lead to the real thing is a source of constant apprehension in media, and complicity for those acts of violence—if and when they occur—is routinely laid at the feet of the GOP writ large; leadership and rank-and-file alike.

“Silence is complicity,” the Washington Post editorial board declared on March 3 in response to a poll that showed roughly one-third of GOP voters would not reject violent remedies if they were needed to “save our country.” That, they averred, was a direct outgrowth of the language Republican lawmakers used. “By not speaking out even in response to overt calls for lethal vengeance and death threats against political foes, Republican officials send a clear message that violence itself is a plausible alternative to debate, and even a palatable one.”

When the often thoughtless Rep. Paul Gosar tweeted a video featuring himself as an anime character killing a cartoon version of Rep. Alexandria Ocasio-Cortez with a sword, the Associated Press deemed the Republican conference’s “silence” an act of tacit support for such conduct. “One of the nation’s two major political parties appears increasingly tolerant of at least some persistent level of violence in American discourse, or at least willing to turn a blind eye to it,” the AP reported. It was “part of a broader pattern in which the party tries to minimize such behavior.”

“Clearly this kind of messaging, where you’re calling out political opponents while you’re shooting at a gun range, is a kind of a violent threat,” Louisiana State University professor Nathan Kalmoe said of a video in which U.S. Senate Candidate from Missouri, Eric Greitens, joined Donald Trump Jr. to fire semi-automatic weapons at a gun range. Sen. Rick Scott has been accused of “making a not so coded appeal for political violence.” So have Reps. Mo Brooks, Madison Cawthorn, Matt Gaetz, and an untold number of right-wing talkers and organizations, with varying degrees of legitimacy.

Ideally, at a time when lawmakers are reporting a rise in threats against them from the hyper-politicized, over-agitated public, all political actors would exercise more caution. The conditions that directly implicate a politician in someone else’s act of violence (like, say, advertising that you would pay the legal fees that result from an act of political violence) are exceedingly rare, but that is not a license to whip up a mob. Those who urge prudence, caution, and circumspection at this delicate moment are dispensing good advice.

If Democrats and their media allies are serious about policing irresponsible conduct, we would expect them to police their own. If, however, we were only privy to a campaign of political advantage-seeking, that kind of consistency would be hard to find. So far, given the absurd dearth of coverage that the potential assassination of a Supreme Court justice has received, we have more evidence in support of the latter than the former. 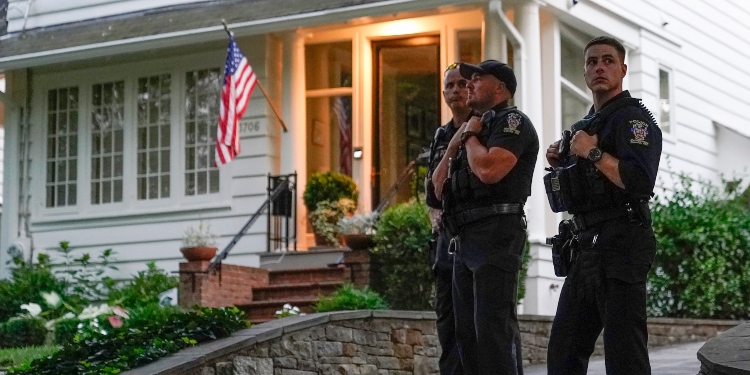 How the Left Learned To Stop Worrying and Love Domestic Terrorism